A perfect entry point to the Nobrow outlook and a reminder that it’s not hyperbolic to state that the publisher continues to produce some of the most beautiful examples of graphic design on the market.

Nobrow’s self-titled “magazine” began life as a showcase publication in which a collection of artists could let their imagination loose on double-paged spreads illustrating that particular issue’s chosen theme. With its sixth number its approach changed to allow for the “flip book” set-up it has adopted to date, retaining both its original format in one half of the book and an anthology type compilation of short comic strips in the other. 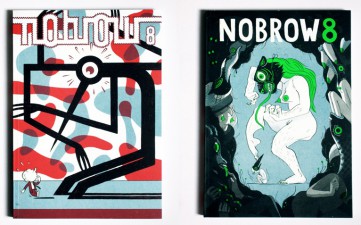 Nobrow 8: Hysteria is the title for the latest edition, summing up the subject matter therein: work from a bevy creators who interpret that topic with a formidable breadth of storytelling techniques. From the whimsical and humorous to the bizarre and the disturbing, no stylistic stone is left unturned in these 120 or so carefully crafted pages.

Looking at the comics half of Nobrow 8 first, I was immediately taken by the contribution of French artist Karine Bernadou. In just four pages she takes the oft examined notion in fiction of the cyclical nightmare but imbues it with such a sense of helplessness and lack of control that the feeling of familiarity in this short is quite haunting. That great Nobrow mainstay Luke Pearson (Hilda and the Bird Parade) provides a strip (below) that begins with another of his masterful evocations of a child’s perspective on the world before morphing into an examination of the hysterical side of hypochondria. 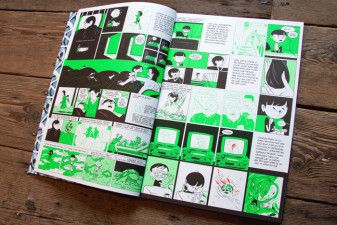 I loved Nick Edwards’s obvious old school British comics influence when I first discovered his work in Blank Slate’s Dinopopolous and his darkly funny look at a small group of post-apocalyptic survivors is very much in that vein visually but with a pronounced adult sensibility. Fans of the genius that is My Cardboard Life will be pleased to know that webcomic’s creator Philippa Rice springs up with a witty little observational piece on social awkwardness in a supermarket. And, for anyone who commutes into work via public transport, Ross Phillips gives us an instantly recognisable account of the paranoiac sensation of dodging the germ-spraying antics of the hideous “never cover their mouths when they cough” brigade… 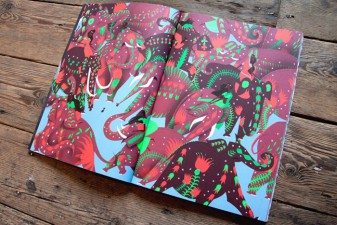 However, the great achievement of Nobrow 8: Hysteria is its dual format philosophy that breaks down the borders of perception between “static” illustration and sequential art. It’s a juxtaposition that serves to remind us that a single image can contain a complete narrative all of its own as well. And the second half of this issue takes the hysteria theme in all manner of directions, utilising the same striking emphasis on green and red hues that the comics part did.  Just look at Emanuelle Walker’s frenzied yet enchanting depiction of a mouse panicking a herd of elephants (above), for example, or Vincent Mahe’s religious groups echoing each other’s disarray (below). They’re images you can lose yourself in, constructing your own sequence of events, characterisations and interpretations of these gorgeously crafted reflections. 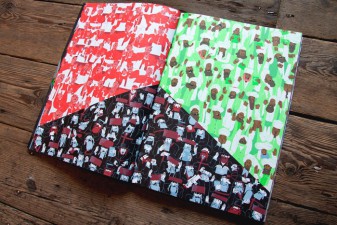 Nobrow 8: Hysteria is a perfect entry point to the Nobrow outlook and a reminder that it’s not hyperbolic to state that the publisher continues to produce some of the most beautiful examples of graphic design on the market. Surely even the most powerful advocate of digital delivery could not fail to be swayed by these handsome examples of the desirable physical object.