What do you get when you bring together sixteen hopeful comic artists and two ‘professionals’ and force them to live together in a thousand year old cottage in Devon with no Internet or phone signal?  Whilst this sounds like it has all the makings of The Shining or Straw Dogs, the results of this course were thankfully much more fruitful and a lot less violent. 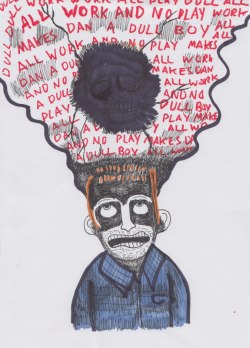 The Arvon Foundation is an arts charity that has been operating since 1968 and offers a wide range of creative writing courses across a range of genres and disciplines from poetry and children’s literature to non-fiction and life writing, all taking place in idyllic and isolated countryside settings.

In the past the Text + Image course (which has been running since 2006) has been taught by the likes of Bryan Talbot, Hannah Berry, and Stephen Marchant, and this year the unshakable duo of Karrie Fransman (The House That Groaned) and Dan Berry (The Suitcase) took the helm. The mix of different backgrounds, styles, and ways of thinking that these two artists brought to the table perfectly complemented each other, and both tutors managed to find a balance in their teaching styles that was appropriate for both the complete novice and for those a little more versed in comics.

The week was split into morning workshops with the tutors with each student having a half an hour one-on-one session with the tutors across the week. At the beginning of the week we were given a brief to follow although if we had come to the course with a bigger project in mind then we were advised to focus on that. There was free time in the afternoon to work, take in the country air, or get lost in a good book, and in the evening there were talks and readings from the tutors, as well as a guest talk by Posy Simmonds on the Wednesday night.

Dan’s workshops tackled things from a relatively technical angle, demonstrating to us his very precise working method, but at the same time actively engaged the group in the act of creating a story together. Whilst at times I found myself getting a little lost in the process, in particular his tutorial covering Photoshop, this wasn’t a fault of Dan’s teaching style but merely due to my own limitations. However Dan was keen to stress his method of working was not to be taken as a blueprint and that the most important thing was to find a method that works for you. 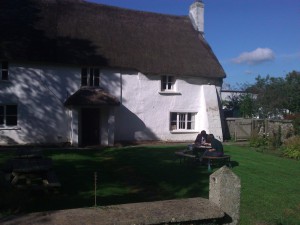 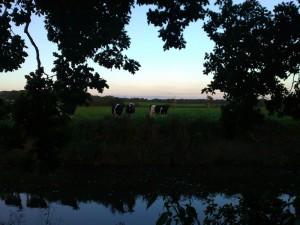 On first glance Karrie’s acted as Yang to Dan’s Yin, a rebellious and stroppy teenager telling us to throw the rulebook out and carry on regardless. But in truth what Karrie was really doing was deceptively clever. She was simply imposing a new set of rules in the form of imposed creative restraints we had to follow in order to produce a narrative corpse style comic. This exercise helped us to think outside of the box, producing comics using collage, comics inside jacket pockets, and even comics on dinner plates.

For the final session Karrie referred back to her dark days in advertising to get us to think about pitching our projects and ultimately selling ourselves. Although this session was peppered with advertising spiel Karrie presented the information in a way that was engaging and relevant enough that it didn’t make me want to drill a hole in my skull. 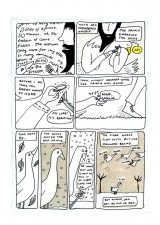 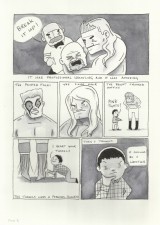 Work from the course by Louie Stowell and Craig Cunningham

Aside from the workshops and the talks one of the most enjoyable aspects of the course was the atmosphere. Being trapped with a group of strangers for a week might seem like a daunting prospect to most but by the end of the week (thanks largely to an ever-flowing supply of good food and wine) we had become quite comfortable with each other, sharing stories and laughing uncontrollably. Both tutors were extremely generous with their time, and the mixed backgrounds and interests of the attendees created something of a creative and collaborative buzz. 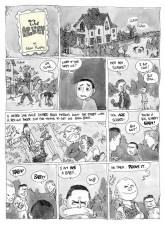 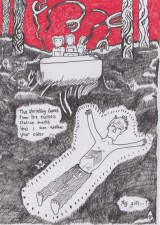 Work from the course by Adam Murphy and Andrew Godfrey

And now for the rub.  £600+ is probably an expensive confidence boost to most people so therefore if you are considering doing this course I would probably recommend you don’t go into it lightly, although there are grants available to those in the low-income bracket. Although the tutors were very careful not to make the week too pressured (and in fact this was one of the reasons for its success) there was an unspoken rule probably felt by all those in attendance that you only got out what you put in. The testimonials on the Arvon site attest to their courses being keys to unlocking potential projects, and judging by a number of the attendees on this years course I can confirm that is true, but from a personal vantage point I would recommend this course to those working on a larger project who are experiencing something of a creative rut. It is because I went into it with a particular goal that I felt like I got so much out of it, the two one-on-one sessions I had with the tutors were especially useful.

One last downside to the course that my fellow attendees brought to my attention was a lack of clarity on the Arvon website concerning the contents and aims of the course. Perhaps I’m biased but I feel like this year we hit the jackpot with Dan and Karrie whereas those expecting more of the same next year or the year after that might not get what they bargained for.

So whilst an Arvon course might not contain within the secret recipe to instant success, I would highly recommend it as it a means of blowing off the creative cobwebs and falling in the love with the process of comics all over again.