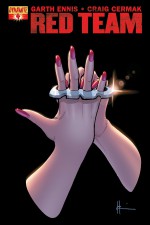 Red Team’s latest target could land them in very hot water, protected as he is from on high. Meanwhile, Trudy’s late night encounter with an amorous newcomer spells trouble of a different kind- the kind that could finish the entire team for good.