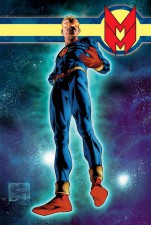 The series that changed comics forever finally returns in 2014, and Marvel is proud to present your first look at the remastered MIRACLEMAN #1! Long out-of-print, these timeless, groundbreaking stories injected a new sophistication into the super hero genre still felt today.

“When these stories were originally colored, the artists were never consulted – and it shows” said Marvel Editor-in-Chief Axel Alonso. “The coloring methods used at the time really hurt the finished product. But through close collaboration with all the artists, we’re proud to now present these stories in a manner that matches their creative vision.”

Working in closely with the original series artists, MIRACLEMAN has been remastered using the original artwork in every instance possible – and the most advanced restoration methods available applied to ensure the most authentic reading experience based on the artists’ original visions for the series.