Comics responses to the Covid pandemic have been many and varied in their approaches to the crisis, as can be seen in our list of pandemic comics resources here. Today we have a look at another of those inspired reflections on the events that began in 2020 in Planet Divoc-91, previously published online in a multi-media form in 2020. It contains work by a number of established and much featured Broken Frontier favourites including Karrie Fransman, Hannah Berry, Rachael Smith and Zara Slattery.

More details about the books and its aims in the press release below.

PLANET DIVOC-91 will be available in UK bookshops from 7 October 2022 and internationally from Velocity Press. 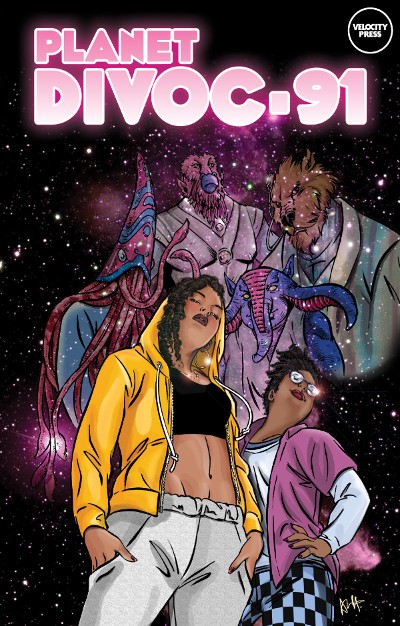 An impressive roster of comic book creators collaborated on PLANET DIVOC-91, an ambitious multimedia project which originally debuted July 15, 2020, on WEBTOON CANVAS. The nine-part comic, which was funded by some of the most prestigious scientific organisations in the UK, is an allegorical sci-fi satire, which reflects on the experience of young people during the pandemic. 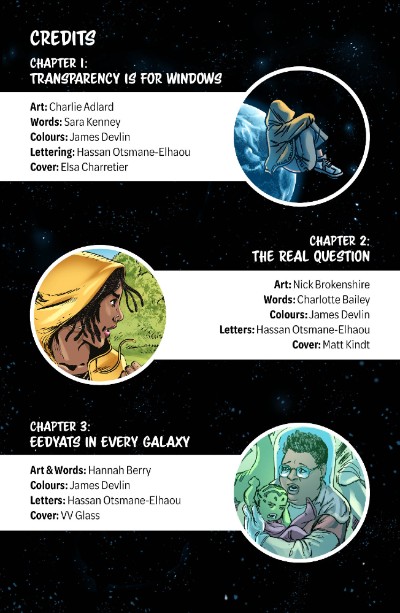 PLANET DIVOC-91 follows the adventures of two earthlings: Sanda Oung, a 23-year-old girl from the UK, and Champo Oung, Sanda’s 19-year-old non-binary sibling. In the series, 15% of the world’s population of 7.5 billion people are now stuck on another planet, miles from the safety of home. Sanda learns that Earth’s young adults have been brought to Planet Divoc-91 because Earth is at risk of an extinction level event. Under the safety of the Board of Adversity Scientists for Intergalactic Leadership (BASIL), led by a charismatic and fearsome alien named Adro, Sanda and Champo soon discover a shocking secret growing under their noses. 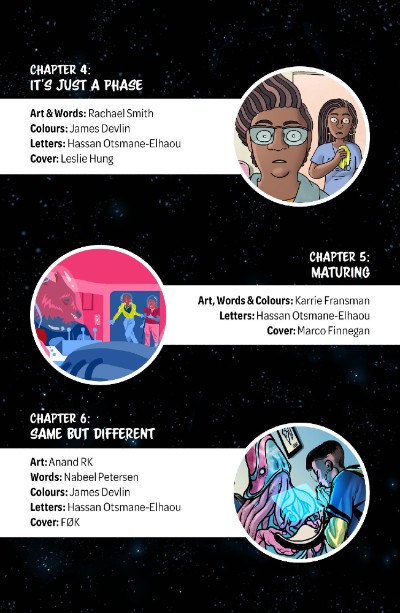 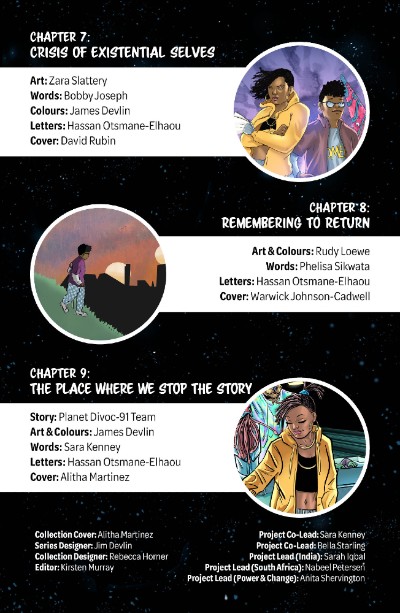 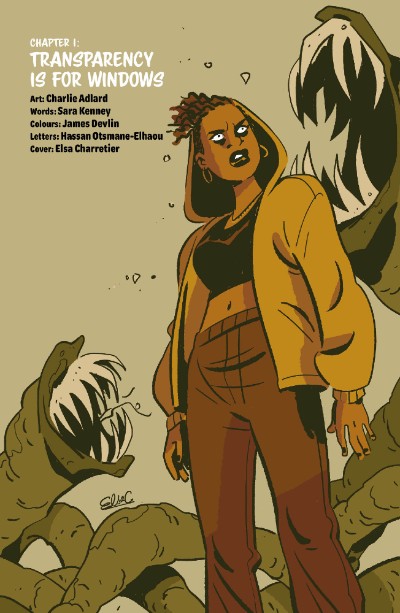 The project’s young editorial team interviewed experts from scientists to historians, journalists to anthropologists, and created articles, art and videos in response. Their first interviewee was Academy of Medical Sciences Fellow, Professor Sir Patrick Vallance, Chief Scientific Adviser to the Government of the United Kingdom. The team went on to interview over 25 experts, including Professor K. VijayRaghavan, Principal Scientific Adviser to the Government of India, and renowned psychiatrist Dr John Parker, Lentegeur Psychiatric Hospital, South Africa. 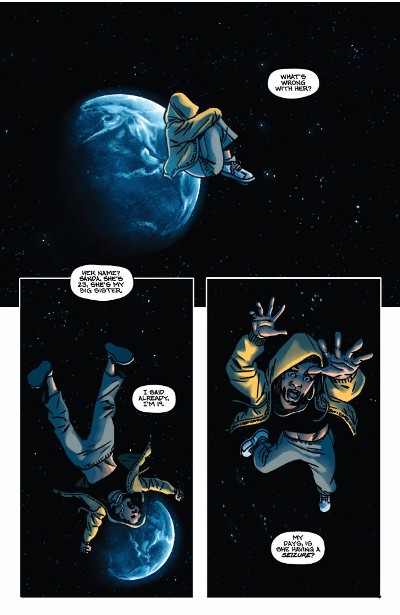 They were also invited to present to the UK’s Independent Sage, have contributed to Academy of Medical Sciences’ working groups and expert meetings, shared their views with the Lancet briefing on adolescent wellbeing and climate change. They continue to build bridges with researchers and policy makers in South Africa, UK and India. See a clip of 16-year-old Alma from Manchester speaking in front of Independent Sage here: https://twitter.com/IndependentSage/status/1350151114356891649 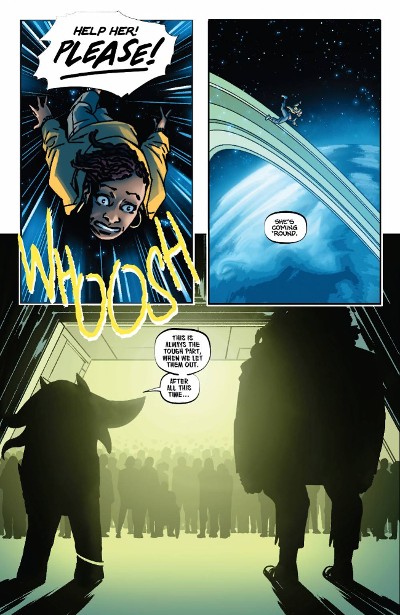 Some of the young team’s creative responses to the project can be found in the print edition of PLANET DIVOC-91, alongside the 10-point Manifesto they created.

The print edition of PLANET DIVOC-91 is a not-for-profit publication. 100% of profits go towards helping young creatives in South Africa, India and UK.

PLANET DIVOC-91 is available in UK bookstores from Friday 7 October 2022. Readers from across the globe can order a copy from Velocity Press here: https://velocitypress.uk/product/planet-divoc-91/. 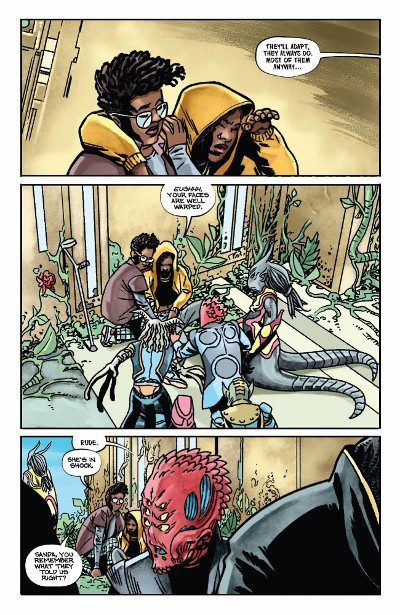 “This innovative project is an inspired way to connect with young adults, explore their views on the Coronavirus pandemic and help them understand what it means for them. I was delighted to have the opportunity to talk to some of the young adults involved in the project and was so impressed by their questions and comments.” —Sir Patrick Vallance, Chief Scientific Adviser to the Government of the United Kingdom

“When I was a kid, interest was, as much as anything the animating force behind whether or not I was willing to learn something. I struggled at school when I was bored. The way this project brings together music, art and education is the kind of engaging material I would have loved and it would have captured my attention. I know many young learners will love it too.” —The Blessed Madonna 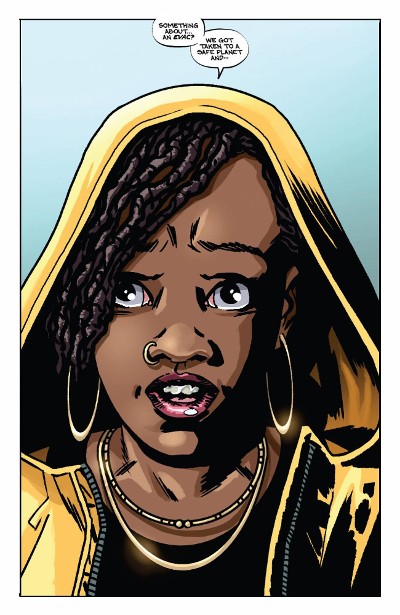 “When it comes to creative responses to the novel Coronavirus outbreak, new [comic] launch Planet Divoc-91 might be the least obvious – and perhaps the most entertaining – to date.” —Graeme McMillan, The Hollywood Reporter

“Comics can be an invaluable tool in envisioning possible futures, and Planet Divoc-91 takes that philosophy to heart while simultaneously using speculative fiction to make sense of our current situation.” —Avery Kaplan, Comics Beat