One of the biggest names in comics is to make his debut on Judge Dredd next week.

The artist on the critically-acclaimed Scalped crime series for Vertigo, RM Guera, comes to the Judge Dredd Megazine with a one-shot Judge Dredd story written by Rob Williams (Cla$$war, Daken).

The Man Comes Around sees Guera bring his trademark gritty European style to Mega-City One as Judge Dredd investigates a series of “explosive” suicides. Williams also uses the elevenpage strip to examine the effect that age is having on the lawman, who is now officially in his 70s.

Coloured by Italian artist Giulia Brusco and lettered by Annie Parkhouse, The Man Comes Around will be published in Judge Dredd Megazine #344, which is available from Wednesday 15th January. 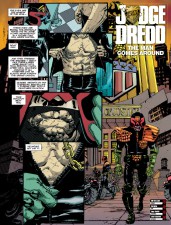 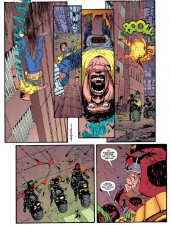 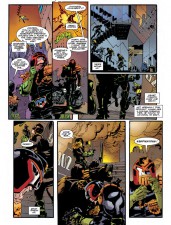 It will be available day-and-date digital from the 2000 AD iPad app and DRM-free from the 2000 AD webshop, as well as in print in the UK and via Diamond in North America. Guera is just the latest major name from US comics to draw Judge Dredd for 2000 AD and its sister title, joining BPRD artists Guy Davies and James Harren.

Otherwise known as Rajko Milošević, the Serbian artist is based in Spain and began his career producing comics for Yugoslav titles. In 1997 he began working on Scalped, written by Jason Aaron, about crime and corruption in a fictional Native American reservation in the US.

Writer Rob Williams said: “Guera’s work on Scalped was just masterful. I was delighted when he agreed to draw The Man Comes Around. His sensibility added to Judge Dredd is a perfect match. It’s a biblical western amidst the crazy of Mega-City One.”