“Is it possible to build a strong home that transcends one’s history and culture?” asks Maureen Burdock, the award-winning graphic storyteller in Queen of Snails. As much as it is an unravelling of such larger-than-life histories, cultures and inherited structures, Queen of Snails vividly recounts Burdock’s family and her personal experiences starting from her childhood. Initially titled The Baroness of Have-Nothing and originally published as a dissertation for the University of California Davis, Queen of Snails is a graphic dissertation cum graphic memoir that unravels various strands and complexity of Burdock’s (past)lifeworld. Uprooted from Munich to Chicago in the US in the 1970s and brought up by her mother (Ingrid), Burdock’s life is marked by frequent displacement, sexual abuse, shame and humiliation leading to an unrequited longing for home and a sense of belonging. To quote her: “home is not a place you can reach by train or plane. It’s something you carry with you.” 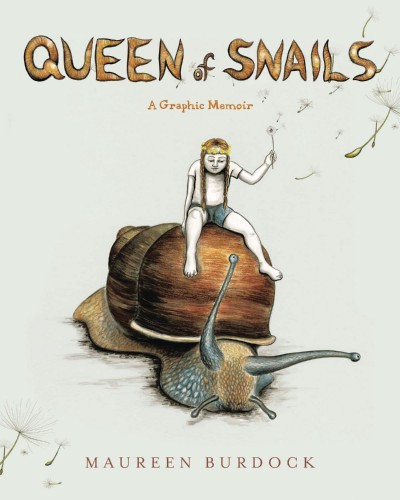 That said, her relationship with Ingrid and her father is complicated—that is, while Ingrid embodies religious conservatism and indifference she also serves as “a connection point across space and time” for Burdock. On the other hand, though Burdock has troubling memories about her father, she develops a perspective much different from her mother to the extent that she even considers her yet-to-be-born son as a “reincarnation” of her father. Feeling unmoored owing to frequent “displacement, violence, and abandonment”, it is Burdock’s “open-hearted and loving” Oma and Opa (paternal grandparents) who offer succour to her. There is also her maternal grandmother who is unapologetically nostalgic about Nazi Germany. 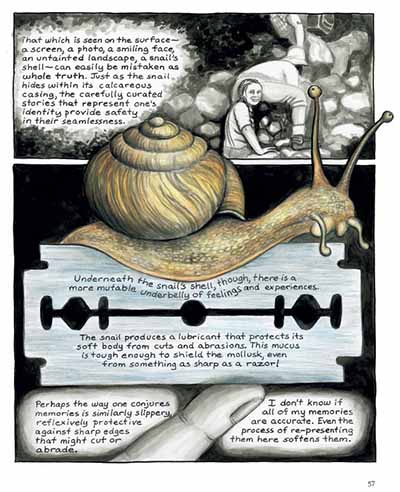 Then there is Burdock’s own personal world which is filled with pain and losses: unwarranted death of Burdock’s bosom friend Esther at Afghanistan, childhood sexual abuse by her own family member (Vitor), toxic relationships and PTSD among others. Such “spiraling into the past” to trace her family lineage, her roots and sources of vulnerability also call the readers’ attention to various larger than life historical and cultural forces that shape her and her family. But what salvages her from such a disquieting past is drawing/making comics which she characterizes as therapeutic, sanative and as a form of self-care. Particularly, making comics not only helps Burdock to process her traumatic past but also to situate her experiences within the shared history of her generation. 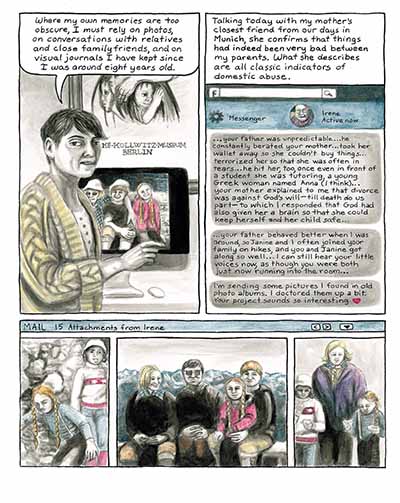 Typical of a memoir, there are meta-moments in Queen of Snails—for instance, Burdock explains how recollection and representation of memories and the intangibly available experience are both risky and exciting. While memory is a “fickle” faculty, it is also an antidote to transgenerational forgetting. Admitting such paradoxes, Burdock explains how such inevitable memory gaps are filled through journals, personal belongings/memory objects, and the like, which to a larger extent recreate and trigger memory. In drawing our attention to the paradoxes of memory, Burdock also invites the readers’ to treat Queen of Snails as mere recollection (as opposed to absolute truth) of significant moments in her life and how she felt about them. In so doing, she underscores the felt and affective nature of memory. After all, as Lynda Barry notes, any autobiography is an “autobiofictionalography.” 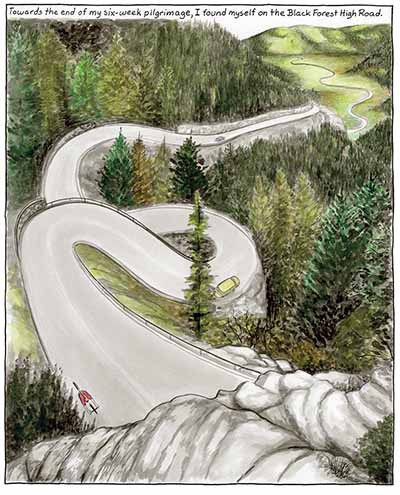 While the medium of comics has in recent times emerged as one of the best media to present  transgenerational, collective and individual’s troubled memories (for instance, Art Spiegelman’s Maus, Una’s Unbecoming among other texts) Burdock, in particular, effectively utilizes the various affordances of the medium. Marked by ligne claire and written in an engaging way, Queen of Snails integrates form and content and braids drawings and writing to carry forward her coming-of-age story. Be it the meticulously rendered retro-style streets of 1970s Chicago in a double spread page or the visually stunning snail which thematizes vulnerability and the idea of home, every page in Queen of Snails is meditative, poetic, and elegant. Then there are several pages in the memoir where passage, tracks and trails are visually invoked both explicitly and otherwise to concretize the theme of roots/routes. 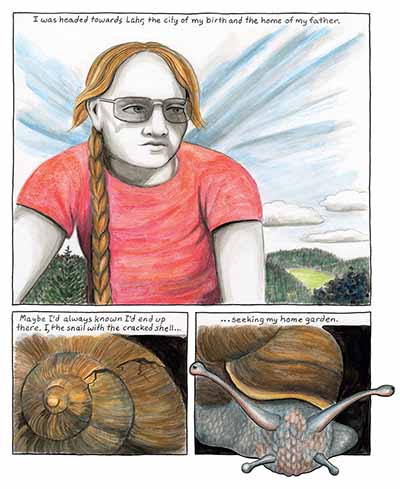 In fact, in Burdock’s oeuvre, roots/routes both as a theme and as a visual trope is common, signifying interrelatedness, interdependency and interwoven genealogies. What is also striking in Queen of Snails is Burdock’s reverence for nonhuman life forms—references to snails, dogs, and gulls to discuss perspectivism, vulnerability and lineage are cases in point. Elsewhere, Burdock’s statement that “across species, we are not so different. We seek safety, shelter, warmth, belonging – HOME” vindicates her position. Read in this way, Queen of Snails is not just a nuanced reading of her own “INHERITED VULNERABILITY” but is also a subtle reflection on the (neglected) aspects of the nonhumans that are equally, sometimes more, vulnerable than humans. 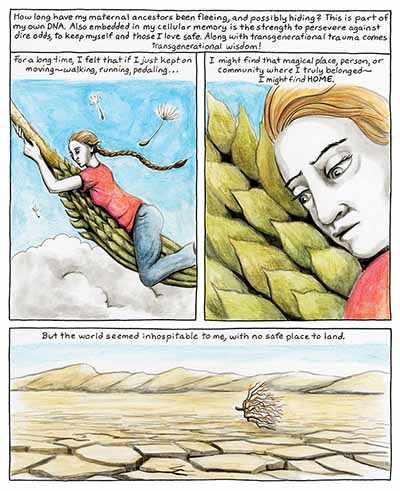 In the final analysis, Queen of Snails is an artfully choreographed visual memoir that sensitively presents the tangled histories of places and individuals and the messiness of emotions and memory. In particular, the graphic memoir deftly demonstrates the determining power of intergenerational and inherited vulnerability and how such forces undergirds Burdock’s life as an artist-individual. By turns tender and passionate, Queen of Snails is as much about (loss of) place, home and belonging as it is about grieving, forgiveness, and healing. While Burdock realizes that “it is not possible to transcend one’s history and culture” she insists that one come to terms with the realities of the past and the determining potency of intergenerational forces in order to develop a resilient self. Such realization, recognition and coming to terms with the past is necessary so that one “doesn’t unwittingly create a REPLICA, and not without recognizing and protecting the most wounded and woundable parts of ourselves, our families, and our world.”

Sathyaraj Venkatesan is a Professor of English in the Department of Humanities and Social Sciences at the National Institute of Technology, Tiruchirappalli (India), where he specializes in health humanities and comics studies, with an emphasis on graphic medicine. He is the author of nine books and over a hundred research articles.