Tackling the subject of Female Genital Mutilation through the medium of comics, San Francisco-based artist Maureen Burdock’s Mumbi & the Long Run is the fourth story in her series The F Word Project: Five Feminist Fables for the Twenty-First Century. These “graphic fables” are a collection of stories with a stated aim to feature “a unique common heroine negotiating a world that still legitimises various forms of violence and inequity towards women.” Previous instalments have dealt with the Ciudad Juárez femicides, childhood sexual abuse and “honour killings”.

With all the publicity surrounding Comics Unmasked at the British Library, and the excellent ongoing work of the Cartoon Museum, other comics-related shows in London at the moment could easily fly under the radar so we wanted to give a shout-out here at Broken Frontier for this one particularly important display of graphic storytelling. Last Friday 30th May, at London’s Space Station Sixty-Five, Maureen Burdock was present at the opening of the exhibition of her original art for Mumbi & the Long Run which is on show there until July 5th. The comic follows the exploits of Mumbi, a Kenyan long distance runner who lost her sister to complications following female genital mutilation, and the moral dilemma she faces when an unethical multinational corporation offers her sponsorship. Needing the financial assistance to help her young cousin Esther avoid the practice of female genital cutting she is left with a very difficult decision… 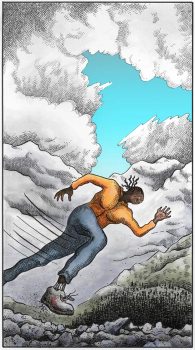 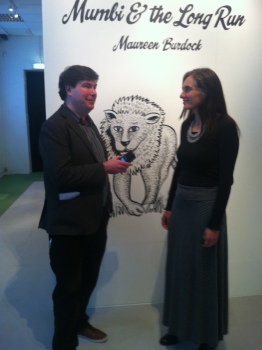 Art from Mumbi on the left and Maureen at the exhibition opening with Panel Borders‘ Alex Fitch, right

Accompanying this longer-form story in the show there’s also a powerful and harrowing short comic account – illustrated by Burdock – of journalist Halima Abdel Rahman’s experience of FGM as a young girl. For more details on the exhibition and the programme of related events check out the gallery’s website here. You can buy copies of the first three comics in the series on Maureen Burdock’s website here where you can also find out more about The F Word Project in particular and her work in general. See sample art from Mumbi & the Long Run in the original Kickstarter video at the top of this blog piece.