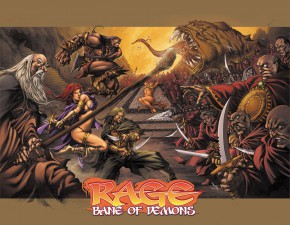 Rage, Bane of Demons is a Graphic Novel written by Eric Peyron and painted by Thony Silas. So far, it has been on sale as an independent App on the iTunes Store, and in the libraries of many digital publishers like Comixology, Kindle, Google Play and Apple iBooks. Thanks to all these publishers, the first story of Rage is now available on nearly all digital devices, and thanks to Amazon’s CreateSpace, it is also available in print at Amazon!

Since then, Thony Silas has been working for Marvel and DC. Amazing Spider-Man: Ends of The Earth was his first work for Marvel. Thony has been for a time one of the pencilers of Venom and Daredevil: Dark Nights, and is now the regular penciler of Batman Beyond.

As for Rage, this is only the beginning. New penciler Alan Quah has decided to join the fun, and we are both in the process of creating a whole newRage Series! As you can see on this page, Alan’s renditions of the Rage characters are absolutely awesome! Alan has been able to build on what Thony did, and came up with something completely original! Since working on these first few pages, Alan has been working for Dark Horse on the Godzilla 2014 adaptation, and is currently working for DC on Vampire Diaries. 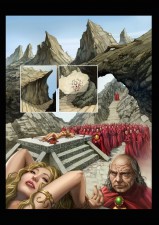 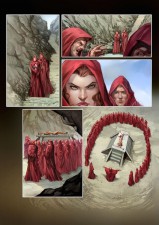 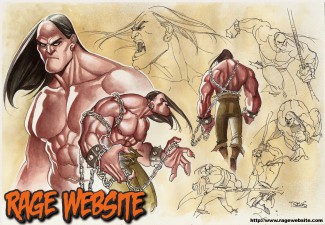 THE STORY
Fun and action ! No other words could better define the Rage, Bane of DemonsSeries. If you have already read the first graphic novel, you know what to expect. If not, it’s available here in various digital formats, and in the Creations Section of this project for eligible Patrons.

This Patreon Project will help me finance the Rage Series, and many other Rage-related projects, including the Rage Artbook, which will contain Rage Sketches drawn by various pencilers around the world, and the new Rage Strips Series with new penciler Stéphane Degardin!

The first story of the Rage Strips Series, Curse of the Panthermen is set in another part of the Rage Universe, and will have repercussions on the other series. A new chapter of the Rage Strips Series will be available each month in the Creations Sectionof the Patreon page for all Patrons, and the first issue is available right now for everyone! We are experimenting new storytelling techniques for these strips, trying to stay close to adventure comic strips, with modern media in mind. The story begins slowly, but give it a chance! You won’t believe what I have in store for the characters! The strips will be monthly at first, and will become weekly if we have enough patrons!

Rage Website is the official website of the Rage Comic Series and all other Rage-related projects. This is the place to go for any Rage-related news. You will also find in the Rage Website the first six pages of the first graphic novel, the first nine pages of the first issue, galleries of illustrations by Alan Quah, Thony Silas, Yonami, and a lot of others, and maybe even a surprise or two! The site is here! Go have a look, you won’t regret it!

When asked about the position I (Eric Peyron) hold in the Rage Project, I usually answer that I am the writer and producer of the Rage Website and of the Rage Bane of Demons Graphic Novel. But that’s not all. Actually, I am writer, web designer, developer of the Xcode versions of the Rage Apps, Editor, and English-to-French Translator. I am also handling the creation, the promotion and the selling of the books on various supports. And I am also the one hosting the Rage Booth in French Comics Conventions. And since I’m on Patreon, I have begun editing video trailers, too… Actually, I am doing everything save Art and Lettering. For more info about the Rage Project, connect to the Rage Website!