Brian K Vaughan and Fiona Staples’ Saga is a tale that’s as boldly imaginative as it is grounded in the complicated tragedies of reality. It excites readers when they get their hands on it and leaves them wanting more when they finish each issue (great news for everyone in this category: Saga is going monthly!) With a wide range of vibrant characters and devastatingly clever writing, the multiple Eisner Award-winning Saga is this generation’s game-changing comic.

Though called a fantasy space opera, Saga is in no way limited by its genre. Its actions rise and fall at its creators’ whims and titillate the audience rather than confuse and jar it. It has elements of tragedy, comedy, action, horror, romance, and it blends them together in a way that enhances the story. It’s reminiscent of Joss Whedon’s Buffy and Firefly; only grander, wilder, and (intentionally) far too expensive to reproduce in any other medium than comics. Therein lies the primary reason that this title is so incredible: the overwhelming amount of respect that its creators have for comics. 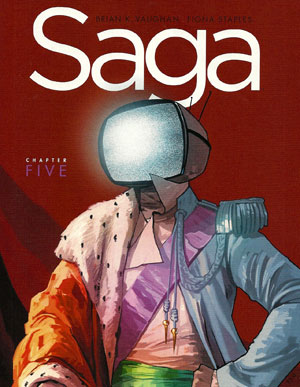 As you work your way through each issue, you get the feeling that Vaughan and Staples really know their stuff. The integration of BKV’s writing and Staples’ art is so organic that the giant grotesque trolls with giant in-your-face scrotums and aliens with TVs for heads engaging in graphic sexual congress don’t come off as random plot devices thrown in for shock value.

Instead, they feel appropriate and act as powerful aids that contribute to the scale of the fictional world and drive the story forward. Rather than think, “Ugh, can’t these characters just get to where they’re going?” we feel excitement and think, “Oh boy, what do Vaughan and Staples have in store for us now?” And they never fail to deliver.

Despite its scale, the story is also very personal. The conflicts, the problems, hopes, goals, and dreams of the main characters (whether heroes, anti-heroes, villains or none of the above) are all so relatable that it feels like an escapist work through which we vicariously experience (or re-experience) the highs and lows of our own lives. Alana and Marko’s problems are our problems, and their victories are our victories.

We don’t want Prince Robot IV to stop them, but we get why he’s trying to, and, somehow, we’ve been there before. We want some characters to succeed over others not because we want good to triumph over evil, because Saga is not about that, but because we know them and we like them.

When talking about the process of penciling Staples has gone into detail about how she takes tons of photos of herself to capture the nuances of the characters in each panel. In addition to taking on the role of layout artist, penciller, inker, colorist, and hand letterer, Staples is also a bit of an actor/director. That’s a lot of hats, and she wears them all so well.

Over the past year, editors on some of the most popular comics today have grunted in frustration over the fact that Fiona Staples is too busy with Saga to do some monthly work for them (and we appreciate it, Fiona, as much as we’d like to see you jump in for a few issues of Captain Marvel, Red Hood, or X-Men). She’s not just a creative inspiration, but a professional one. Few people have the talent or resolve to sacrifice the security of a big and steady paycheck and notoriety of being the primary artist for any number of the iconic characters for creative freedom and control, and ownership of the things she creates. 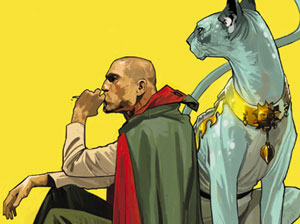 Saga truly is a game-changer. In a world where the big publishers have comic book development down to a business, BKV had lofty ideas about the state of the industry. Ideas like a static price tag and a high bar for the amount and quality of content this price tag buys you. The series’s success, inclusive of its controversial imagery and language (that would never appear in the interiors of a standard superhero book), shows the fans, the creators and the publishers that a strong story and exceptional art (not continual crossover tie-ins and relaunch gimmicks) sell books, earn money, and satisfy fans.

The enormous fan support has allowed Vaughan to further carry this trend into the world of comics with The Private Eye, a creator-owned collaboration with Marcos Martin. While self-publishing creator-owned projects is far from big business as of yet, Vaughan and Martin have been able to sustain themselves through the creation of two additional issues, showing the world that there continues to be support from the market for creators with fresh ideas.

When you buy Saga, you’re not only getting an excellent book for yourself—full of rich social and political commentary, superb drama, and all-consuming art—but you’re also participating in the world of comics; promoting the idea that imagination and free thinking are things to be rewarded.

Saga #13 goes on sale this Wednesday from Image Comics. The first two trade paperbacks, collecting issues #1-6 and #7-12 respectively are on the shelves of comic stores everywhere.