BROKEN FRONTIER AT 20! When I officially took over the top spot at Broken Frontier in 2017 one of my key aims was to push BF in the direction of social activism; to prioritise not just work by and about marginalised voices but also to look to promote socially conscious projects that used comics as a medium to communicate. Today’s interviewee is Dr. Sarah Wishart, Creative Director of EachOther, a UK-focussed charity that uses “independent journalism, storytelling and filmmaking to put the human into human rights.”

EachOther’s current project How to Get Out of Detention: A Comic for Immigrant Detainees – an accessible comics guide for those trapped in detention centres – is exactly the kind of work we want to spotlight here at BF. The comic is currently crowdfunding on Kickstarter and you can back it here. Given the UK government’s current horrifying policies on refugees and their hardline vilification of immigrants this crowdfunder is more important than ever. You can read more about comics dealing with the Refugee Crisis here at Broken Frontier. 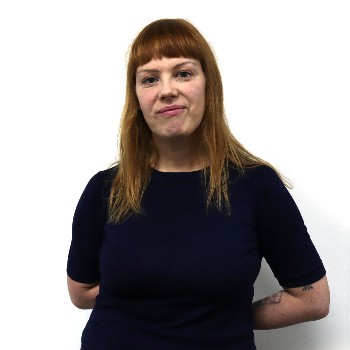 ANDY OLIVER: To begin with can you give us some background on the work of EachOther, its history, and its aims?

SARAH WISHART: We’re an unusual charity – founded by human rights barrister Adam Wagner, who wanted to find a way to counter the negative narratives in the British mainstream media about human rights. We use communication and storytelling to try and do that – whether it’s through journalism explainers, video or most recently in our recent launch of the first EachOther podcast . We work hard to ensure that we feature the voices of people with experience of the issues under consideration, and wherever possible co-create projects with those people. Like my feature documentary about school exclusion that only features young people and was co-produced with groups of young people in London and Scotland.

AO: You’re currently working with BID (Bail for Immigration Detainees) on a crowdfunded project to bring a comics version of the How to Get Out of Detention guide. Before we talk about the comics project can you tell us a little bit about the guide’s importance and the situations of the people it benefits in its current format?

WISHART: There are so many people stuck in detention centres and we can only imagine what it must feel like after trying to change your circumstances by fleeing war, or environmental crisis – to endanger your life and your family’s to then end up somewhere like Yarl’s Wood. BID can only help so many people directly but they make a range of resources available for everyone who needs it and their self-help guide page has been accessed thousands of times, we’ve heard from people who’ve used the guide who talk about how essential it was, even just in terms of giving them a process that was simple to follow and established what they were entitled to. We heard from people in the research for this campaign who talked about how important it was for them to shift how impotent they felt in detention centres by having a clear step by step process to follow and finally some agency.

AO: Comics as a medium has a remarkable ability to communicate and connect with readers on an empathetic level. How and why are EachOther and BID looking to use that aspect to provide an accessible version of the guide? How will it be made available to those who need it?

WISHART: Connecting with human stories and centring empathy is really at the heart of the EachOther ethos and we’re always looking for new formats to do that with. I’ve long been a comic fan – from digging through my best friend’s brothers’ 2000 AD when I was 8, to my absolute obsession in my teens with Tank Girl. I’m fascinated by the way people like Harvey Pekar have centred the everyday, even when the everyday is dealing with huge things like cancer. The connection we get to do through the medium comics is of huge importance to the work we do. So that’s the why!

The ‘how’ is through using our teams’ skills to translate human rights and legal content into something more narrative which will help the artists then illustrate something to become more accessible to more people. BID have already done a big bit of work by getting the Home Office to make their guide available in all of the detention centres in the UK and they’ve asked us to expand the number in each centre by three more – so there’ll be the guide and then an additional three copies of the comic there for people. But detention centres aren’t the only places that people are detained – and we’re really excited to learn we’ve secured some funding if we get to target, to do the advocacy work to make the guide be available in all the prisons in the UK – so I’ve just created a new perk so that people can be responsible for getting their copy of the comic into more places that people need it. 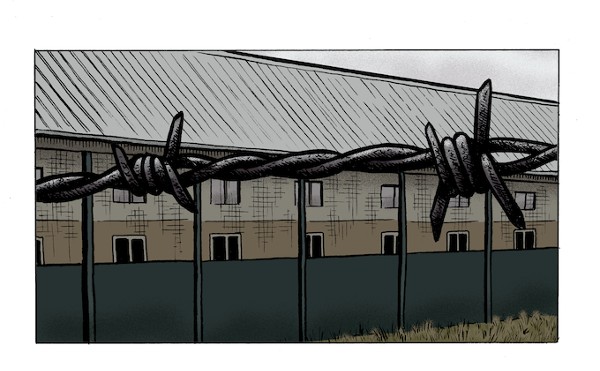 AO: There’s a number of artists involved in the project including Jon Sack, Rumbidzai Savanhu, and three names that will be very familiar to Broken Frontier readers – Sabba Khan, Dominique Duong, and Shazleen Khan. How did you go about curating the creative contributions to the comic and what does each artist bring to the project?

WISHART: Even though I’m personally obsessed with comics – professionally I’ve had much more to do with animation as a medium. I worked in the team that produced the RSA Animates and Shorts, and though I didn’t work on any of those animations directly – I spent a year travelling and working with animations departments in the support of piloting an animation brief for the RSA Student Design Awards (which is now fully embedded in that programme) and that meant I built big relationships with animation departments and that was key in engaging with early career artists and established artists equally.

When we started thinking about how to find artists to work with us on specifically illustration and comic projects – I had worked with amazing people like Jules Scheele already but I didn’t have the relationships with academic departments that I had with Middlesex animation department for example to introduce me to people who’d like to work with EachOther. I am though friends with Martha Julian, Festival Director of course of ThoughtBubble and asked her who she’d recommend and she introduced me to Dominique, Rumbi and Shazleen! I was already a huge fan of Sabba’s of course and Jon Sack had actually approached me – it feels like years ago and it probably is – about my Excluded documentary when we were looking for someone to help with anonymising young people in that project. 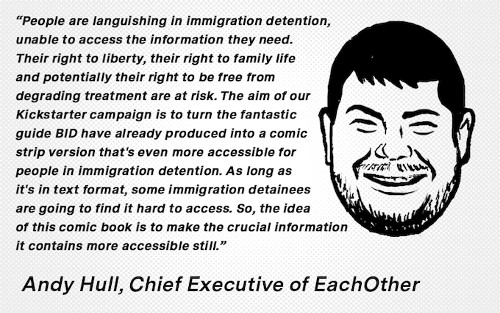 I think bringing five artists together enables us to bring not just different styles but different themes to the fore. Jon will be the one I work with for the longest time on this particular but I’m really looking forward to creating a script and working with everyone to ensure they get to work on areas that inspire and connect them to the project. This isn’t the only comic project we’re planning to work on so building relationships with artists is also a key aspect of this project!

AO: In terms of the process of converting the guide to comics form what do you foresee as being some of the particular challenges in translating a legal document into sequential art?

WISHART: In general – this is a core part of my day-to-day job. I’m always being asked to create creative content out of legal documents – most of the time – I’m reshaping it into video or animation or trying to find ways to take concepts into accessible formats and forms. Either in relation to current issues or ideas we want to highlight. And this is no different – but Jon and I have already done a bit of R&D work in order to understand what it was we would be asking people to fund, and basically wherever possible, we’re going to lean heavily into the narrative threads – showing people undertaking the different angles of the guidelines for example in the ways they’re likely to encounter it in detention.

AO: This isn’t your first foray into comics. What was the response like to Journeys Through Mental Health by Sabba Khan (above) from its target audience?

WISHART: We launched that project deliberately over Christmas – it might not seem like the most Christmassy subject, but people really struggle at Christmas with mental health, and I had been charged by the young people who had told us their stories to ensure it was released at a good time to engage people. All of the young people I spoke to, had volunteered to get involved because they wanted to help other people in their position. They wanted to let people know the things they wish they’d known at perhaps the most difficult time in their lives. We released the digital comic slowly – so a strip a day – building up into the full comic online. It generated a lot of conversation online and the individual strips went out across our social media platforms.

AO: What else can readers be doing to support EachOther’s work? How can we help spread the word?

WISHART: We know this is an unusual project, but we think it has such a universal appeal. Everywhere all over the world people are in more and more fragile positions, forced to flee their homes because of war, and particularly climate change related situations. This is only going to escalate, and we can see that people want to know how they can practically help. Raising awareness of this campaign where you can really practically help someone understand their rights and start the process to get them out of detention for themselves.