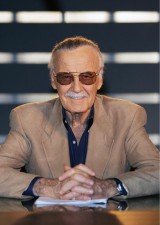 The Stan Lee Excelsior Package will include:

Excelsior Packages are priced at $160.00 and do not include admission to the show, which is available separately (see details below).

In addition, the Baltimore Comic-Con will be hosting an All-Star Reception Starring Stan Lee on Friday, September 6, 2013 at 8:00 pm! An all-star lineup of special comics guests, including Mark Buckingham, Dave Gibbons, George Perez, Stan Sakai, Louise Simonson, Walter Simonson, and others welcome Stan Lee and YOU to the 2013 Baltimore Comic-Con. This private, limited event is only open to ticket holders of this special engagement and will include a panel discussion, catered light snacks & desserts, as well as a chance for Stan to sign your item Friday night! A cash bar will be available.

The All-Star Baltimore Comic-Con Reception and Panel Starring Stan Lee Package will include:

The All-Star Reception Package is priced at $300.00 and does not include admission to the show, which is available separately (see details below).

“There is no better way to kick off this year’s show than at the All-Star Baltimore Comic-Con Reception Starring Stan Lee,” said Marc Nathan, show promoter of the Baltimore Comic-Con. “We’ve got an amazing line-up of creators who will be attending the event and honoring one of the founding fathers of comics.”

2013 Baltimore Comic-Con VIP Package will include:

* Must be in the VIP line 30 minutes before scheduled presentation times; VIP Seating is guaranteed but not reserved. Not including special ticketed events.

VIP ticket packages are $99 and include entry both days of the show.

General Admission Tickets to the show will also be available for purchase at the following prices:

VIP Packages and admission tickets can be purchased online by visiting baltimorecomiccon.com/tickets/.

In the coming weeks, look for more announcements from the Baltimore Comic-Con. We are looking forward to highlighting our guests, the Harvey Awards, industry exclusives, and programming. The latest developments can always be found on our website, Twitter, and Facebook pages.