THOUGHT BUBBLE 2022! Over the years, via social media, I had already become acutely aware of UK artist Tom Humberstone’s love for the game of tennis. That passion is embodied in every page of his graphic biography Suzanne: The Jazz Age Goddess of Tennis, published by Avery Hill, and it’s one that is undeniably infectious in its delivery. In these pages Humberstone provides us with an intimate study of the life of Suzanne Lenglen, the women’s world number one player through most of the 1920s, and a figure in the sport whose position undoubtedly changed the game forever. 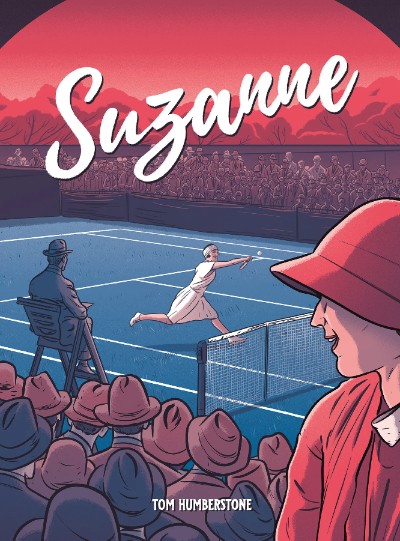 Lenglen’s rise to the top rung of the tennis ladder was a colourful one indeed. Pushed ever harder by an overbearing father, whose ambition is depicted here as far exceeding his compassion, she began a journey from teen prodigy to the dominant force on the circuit. Humberstone explores the multi-faceted aspects of her rise to prominence with a keen attention to detail that underlines the obvious research that has gone into the book. Lenglen’s less cumbersome playing outfits, for example, that provoked a sense of scandal in the public; her rivalries and relationships; the contradiction of a sport that insisted on an amateur status which ensured only the elite could participate; and her fractious relationship with the press on her way to becoming a near unconquerable force in the game. 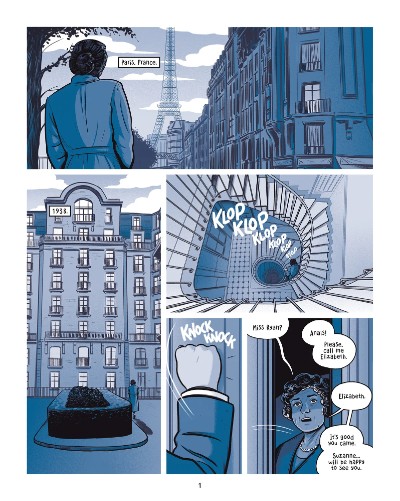 This is a fascinating biography that breathes real life into its historical subjects, fleshing each character out and making them feel like layered, distinct individuals. Visually its greatest strength is in Humberstone’s ability to capture a fluid sense of motion from panel to panel; perhaps the most difficult target to achieve in sports-based comics which can often feel incongruously static in their sequentiality.

A large part of this is due to Humberstone’s studied depiction of the human form in action, particularly in occasional sidesteps into panel-less tableaux that showcase the sheer physicality of Suzanne’s sporting prowess, or scenes where players burst through panels with a kinetic impact. In this regard sound effect lettering should also not be underestimated and Humberstone uses it adeptly to bring us into the competitive immediacy of the moment. 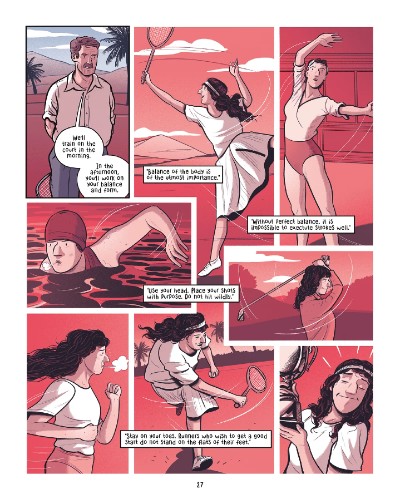 Colour plays a crucial role too; the limited palette evoking a subtle period feel without draining the life out of the page in the way that a sepia application can often do in period pieces. Indeed Humberstone uses the blue/pink colour scheme to intuitively guide the reader’s eye around the page – to draw attention onto one character in a crowd scene, for example, or to ensure that Suzanne is always the central focus in key sequences. 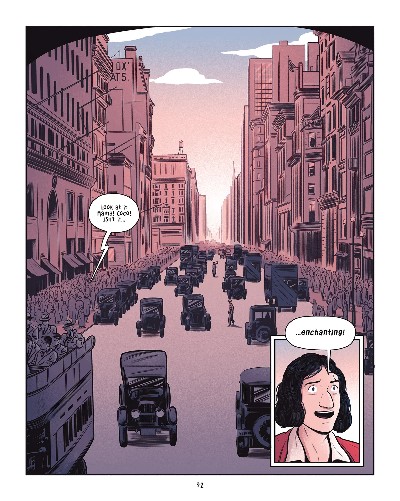 Bringing a near forgotten star back into a most appropriate limelight around a century after her heyday, Suzanne: The Jazz Age Goddess of Tennis is triumph not simply for its considered and meticulous research but for the sheer power of its visuals. Tom Humberstone comics may not be as frequent as we would desire but when they do come around they are never less than a polished gem of graphic storytelling. The finest graphic biographies make you want to immediately go out there and discover more about their subject. Suzanne: The Jazz Age Goddess of Tennis is certainly an excellent example of that.