Celebrating Pride Month! Taking a Scottish folk ballad dating back to the sixteenth century as its starting point Aven Wildsmith’s Tamlin, from Knight Errant Press, brings queer romance, mythology and graphic poetry together in self-contained comics package. The original story revolves around the character of Tam Lin who, having fallen off his horse in the forest, was captured and enslaved by the Queen of the Fairies. In that version the pivotal moment is when he encounters a young woman named Janet in the same forest. While there are a number of variants on the tale what ties them together is that Janet eventually frees him from his supernatural captors by embracing him tightly even as he is magically transformed into a number of wild and monstrous creatures. 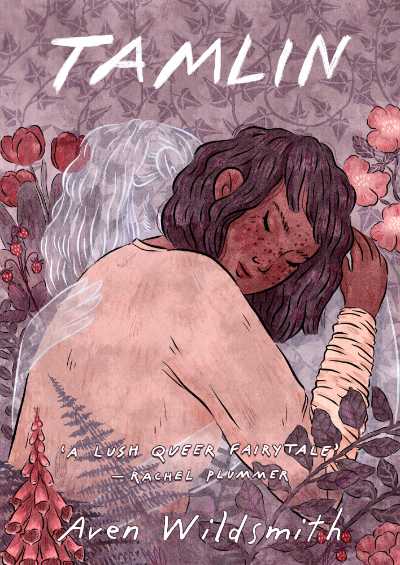 In Wildsmith’s retelling they shift the story into the realms of queer fairy tale with Janet now encountering Tamlin, a female version of the ballad’s original character. Tamlin is a former mortal who is similarly in thrall to the fairy kingdom and in need of release from its clutches. Here Janet finds sanctuary in the woodland surroundings where she meets Tamlin, whose mystical, ghostly appearance indicates that she is trapped there in the fairy realm. As the two fall in love, Janet realises she must put herself at risk to undo the enchantments that have imprisoned Tamlin. 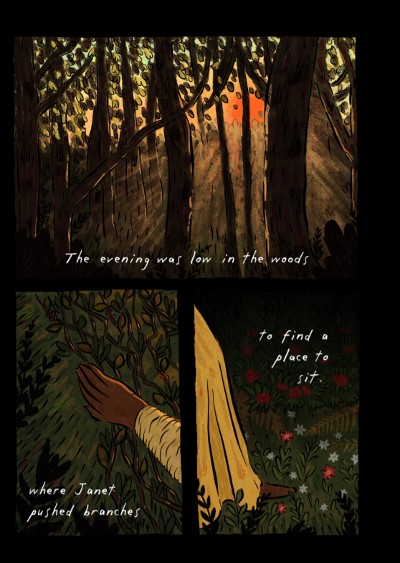 Wildsmith’s re-interpretation of this haunting piece of Scottish folklore is a beautifully rendered blend of comics and illustrated verse. Here the forest itself becomes an ancillary character; its environs often becoming the main visual focus that Janet and Tamlin’s tale floats across with an ethereal rhythm. Wildsmith is less concerned about sequential movement and more about creating mood and atmosphere, and their use of more freeform pages and unpredictable perspectives plays a large part in the magical, spiritual tempo of the book. 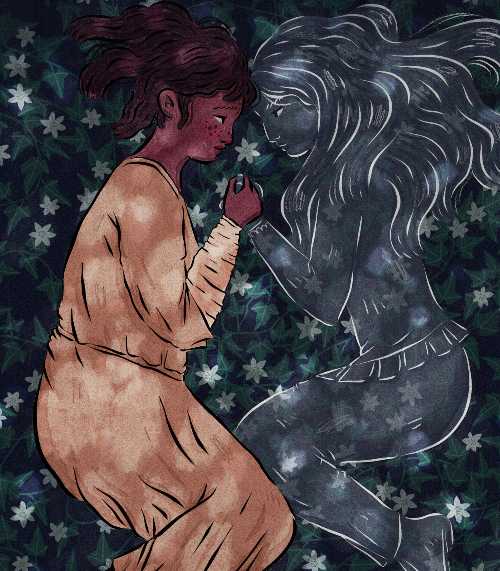 No doubt from an interpretive point readers may find their own allegorical meaning in the key sequence where Janet must hold onto her true love despite the forces that seek to tear them apart. But apart from its role as queer fable Tamlin is also a stunningly illustrated piece of storytelling with a rich use of language and delicately crafted application of colour. Wildsmith also uses lettering to strong effect. It has an almost handwritten appeal that adds a connective personal note, with the occasional depiction of the characters’ physical forms almost as speech balloons in themselves adding to this feel. 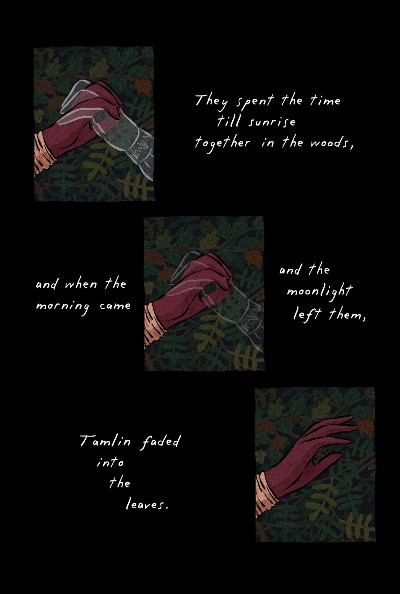 This was my first exposure to the work of Aven Wildsmith but hopefully not the last. Another recommended celebratory LGBTQ+ offering for Pride Month in 2022.