It’s important to mention from the outset that today’s ‘Small Pressganged’ choice – The Man Called Uncle Tim #1 – is not so much a comic book as a zine that employs some of the standards of the comics form. While long-term readers of this column know that its remit is to unearth gems from the worlds of self and micropublished comics I have, from time to time, covered work that adopts some of the conventions of comics but strictly speaking is more accurately an illustrated story than sequential art. The Man Called Uncle Tim #1 fits firmly into this bracket. It’s autobio work from creator Lindsay Draws that traces her very personal investigation into the fascinating life of the uncle who died in the same year that she graduated back in 1995. 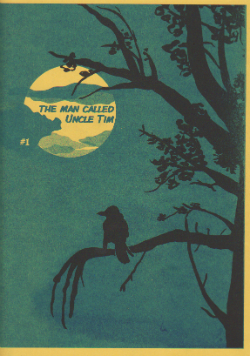 Uncle Tim is something of an enigmatic figure to Lindsay; a detached familial presence removed from wider life through both choice and circumstance, and one that she only remembers meeting on a single occasion at her grandfather’s funeral. In the early part of the zine we see this slightly mysterious soul from the perspective of Lindsay’s younger self – her understanding on a basic level that he and his partner Warren were in a relationship but without a greater understanding of the implications, given the prevailing attitudes of the time.

As the story progresses we become aware that Tim’s domestic situation is far more complex than we originally believed. He and Warren lived in a “queer polyamorous intentional community” with two other men, actively devoting their time to protecting Raven Rocks, the area in which they lived in Southeast Ohio from the strip mining that was devastating the natural beauty of the land around them. Adding to the intriguingly layered life of Tim is his commitment to his Quaker ideals.

The author’s stated intent with this project is to celebrate her uncle by examining his life through the perceptions of her extended family and separating her impressions of him from his death. In that sense The Man Called Uncle Tim is a mix of both biography and personal journey and this opening chapter focuses on an interview with Lindsay’s grandmother, Tim’s mother. 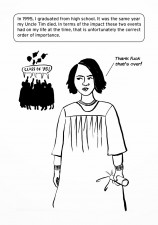 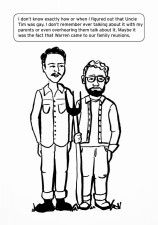 It’s a touchingly open and honest report by a woman whose acceptance of her son’s sexuality at a time when such understanding would be practically unheard of is beautifully and movingly portrayed. Events are recounted in her grandmother’s own words allowing a candid and sometimes raw firsthand account of a woman whose support was unconditional, and yet who still felt a sense of pain and disappointment that her son’s social activism meant he and his partner essentially secluded themselves away from the rest of the family. There’s a significant diversion into the history and basic tenets of the Quaker movement towards the back end of this issue which gives vital background into the faith that informed the lives of all the major players in this mini saga. Questions are also raised about a potential schism in the family that no doubt we will learn more of in instalments to come… 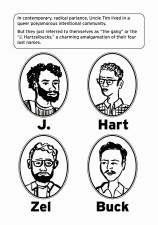 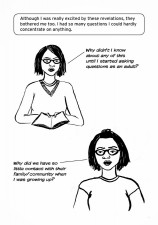 If I say that Lindsay Draws has an economical storytelling technique I’m not using that as a euphemism for “simplistic” or “crude”. Rather that she cuts each vignette down to the core facts, ensuring the pure humanity of the narrative is realised by avoiding over-elaboration, or the distraction of the adoption of an ostentatious or too knowing writing style. Similarly, the clarity of her illustrations gives the narrative an economical expressiveness.  It’s a wise approach – this is a story that speaks for itself and needs no stylistic embellishment to make an impact. The graphic memoir as a strand of comics-related storytelling may’ perhaps, have come in for something of a mauling over the last year or so for its perceived prevalence in publishers’ schedules but there is no doubting its efficacy as a means of communicating personal experience in a way that few other media can. The Man Called Uncle Tim is a perfect case in point and also a sterling example of that sense of democracy that surrounds the DIY culture of self-publishing. I look forward to seeing the author sharing more of this story with us in the future.