The Dark Galleries deals with American (and some British) films of the 1940s and 1950s in which a painted portrait plays an important part in the plot or the mise-en-scène. Noir thrillers, gothic melodramas and ghost stories particularly feature portraits that seem to exert a magical power over their beholders. 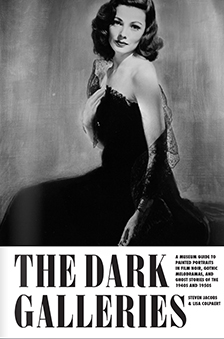 They came up with a list of more than 80 movies and started to catalogue their finds thematically. What they came up with is a fictional art exhibition entitled The Dark Galleries:

Imagine a museum in which the portrait of Carlotta Valdes, an important prop in Alfred Hitchcock’s Vertigo, hangs on a wall next to the painted portrait of the title character of Otto Preminger’s Laura and opposite the uncanny portraits of the desired or murdered women in Fritz Lang’s Scarlet Street, George Cukor’s Gaslight, and Nicholas Ray’s Born to Be Bad. In an adjacent gallery, the visitor of this imaginary museum can contemplate the portraits of patriarchs that feature in films such as House of Strangers, Suspicion, Gilda, and Strangers on a Train. This is precisely the concept of this book.

Published by Belgian art publisher MER.Paper Kunsthalle (whose books about artists Sam Dillemans and Luc Dondeyne I have covered before in this column), it is an exhaustively researched book, divided into three major chapters: art and artists in the American cinema of the 1940s and 1950s, an illustrated survey of the subject and the museum catalogue of painted portraits. While part two and three certainly have their merit within the parameters of the book, part one is where the real sustenance resides.

Extensively exploring the psychological effect of portraits on the human psyche, the place of portraiture in a wider cultural context and the relationship between art and portraiture, it provides the reader with a deeper cognitive understanding of the importance of this branch of the arts and its relevance in the movies spotlighted. The authors even provide a historical context and some insight as to how the paintings were physically made in those eras. Apparently most of the portraits were painted on top of enlarged photographs – a practice quite common in art circles, and not frowned upon in those days.

Of course, some portraits have more bearing on the plot than others, as in Vertigo or Laura, but Jacobs and Colpaert neatly divide it all up into chapters with titles like Artists & Models; Bad Art, Modernism & Anti-Modernism; Crimes & Clues; Mad Artists; Paintings Concealing Safes etc. It makes reading The Dark Galleries a delightful experience, despite the book’s rather analytical approach. You simply choose the subchapter you want to read and switch to another whenever you feel like it – or at least that’s how I approached it.

In The Dark Galleries, Steven Jacobs and Lisa Colpaert have compiled a fascinating look into the mental make-up of humanity by examining the relationship between paintings and cinema in a specific cultural timeframe.

I can wholly recommend this book if you are fascinated by the liaison between art and the mind, portraiture and human cognitive psychology, or the impact of cinema and art upon us.

If you are interested in this book, the publisher has released an eBook preview at ISSUU that is well worth your time: read The Dark Galleries.

The Dark Galleries by Steven Jacobs and Lisa Colpaert is published in English by MER. Paper Kunsthalle. It is a black-and-white softcover retailing for €29,50.