Is it really two years since I reviewed the first issue of Jamie Gambell’s celebration of old school super-heroics in The Hero Code here? Back then I noted that “in this pessimistic and exploitative age of super-hero comics there’s something really rather admirable and appealing about Gambell’s back-to-basics approach.” 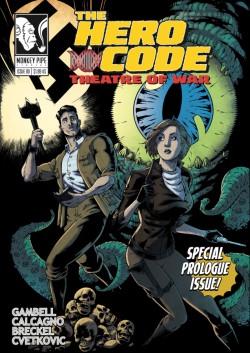 And indeed there was! What Gambell had set out to do was to return the super-hero book to its roots as pure escapist, wish-fulfilment fun; a black and white world where the good guys were good and the bad guys were bad, and it was actually possible to tell one from the other. It’s a very basic starting premise but, given the current state of Big Two super-hero books, one that the two former purveyors of costumed four-colour fun seem to have completely lost sight of.

The Hero Code: The Theatre of War is a miniseries taking place within the same universe as Optiman, the Black Wraith and Myth – Gambell’s take on the DC big name “Trinity” of super-heroes – but set some decades prior during the Second World War. This first issue serves as an origin piece for mystical hero the Occultist whose creation, without wanting to give away too many salient plot threads echoes a certain era in the history of magical protagonist Doctor Fate.

With the story jumping backwards and forwards in time – ramping up the tension as the bigger picture is slowly fed to the reader in increments – Gambell introduces us to Professor Worthington and his companion Dana: two adventurers attempting in 1941 to keep one step ahead of the Nazis as both parties search for a powerful artefact in Syria’s ancient Library of Lost Words. But their quests will put both sides of this rivalry in danger of annihilation as malevolent forces are unleashed and a new hero is born from the ashes of this conflict…

Now, what was I saying about fun storytelling? This issue’s whole opening section could easily have come from the first minutes of an Indiana Jones movie and, indeed, there’s little doubt that Worthington and Dana have a spiritual predecessor and inspiration in that very same celluloid-based archaeologist. As with the main The Hero Code series Gambell is hardly attempting to re-invent the wheel here but, to stretch that metaphor a little, he has taken out his puncture kit and is doing his best to effect a temporary repair.

Throughout, Gambell’s dialogue has a lively theatrical flourish to it that captures with dramatic relish the pulp overtones that seem destined to be such an integral part of this miniseries. The story’s pacing is excellent and here he’s aided by the flowing visuals of Agustin Calcagno who is more than a match for the energetic, scene-switching script. Check out the wonderfully choreographed double-page sequence below to see just how in synch this writer-artist partnership is. When the issue moves into its more supernatural-heavy latter stages Calcagno really hits his stride giving us dynamic Lovecraftian horror and ethereal otherworldliness. 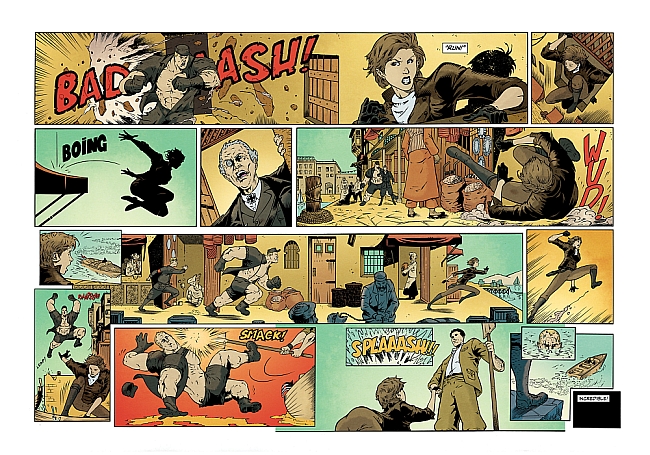 This is a spot of riveting high adventure that 12-year-old me would have loved and exactly the sort of material missing almost entirely from the current super-hero market. Yes there are sporadic attempts to appeal to a juvenile audience in the Tiny Titans kind of range but so little sustained effort is spent on trying to rediscover the original – and what should be primary – age range for super-heroes. Gambell and Calcagno capture everything awe-inspiring about a seemingly lost age of comics here without ever degenerating into a pointless retro fest. Comfort reading with a warm nostalgic glow!