The Listening Agent is another laconic and beautifully understated collection of work from Joe Decie, underlining his undoubted status as one of the most unique creative voices on the current British comics scene.

Joe Decie’s work has been a particular favourite in our ‘Small Pressganged’ column at Broken Frontier with reviews of his The Accidental Salad from Blank Slate Books here and Pocket Full of Coffee from Retrofit covered here. For those unfamiliar with this creator, Decie’s work has a surreally lyrical quality to it with its juxtaposition of the mundane and the bizarre fostering an air of casual dream logic to much of his material. 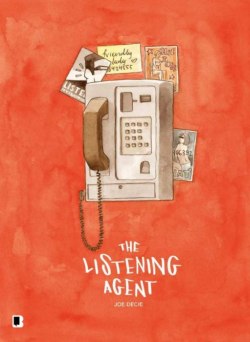 The Listening Agent is the latest collection of his largely one-page strips, comprising anything from just a single illustration gag to multi-panelled affairs building up to offbeat punchlines. Decie’s work sits on the very periphery of the slice-of-life genre with comics that contain autobiographical observational humour coupled with frequent forays into the realms of the utterly absurd. It’s anecdotal comedy about family life that mixes the domestic and the fantastic with its wry placement of the almost tediously commonplace and the tortuously anomalous side by side.

The Listening Agent takes its title from one of Decie’s more fantasy-filled daydreams in this volume wherein Joe opens up a premium rate phone line for those with a need to unburden themselves of their innermost secrets to a complete stranger. It’s one of a number of richly ridiculous scenarios to populate a book that also contains eccentric gems that, variously, provide a novel method for remembering drunken conversations, underline the harrowing consequences of treading in fox poo, and detail the author’s fractious relationship with the dirty dishes in the washing up bowl.

What’s most interesting to note about The Listening Agent, though, is that there seems to be a shift towards, shall we say, less embellished autobiography here. It’s Joe’s son who is the real star of the show, taking centre stage in the bulk of the strips. Similar to the way that the growing pains of James Kochalka’s offspring became a pivotal part of American Elf’s ongoing success so do young master Decie’s antics become the focal point around which much of the comedy revolves. From his delightful destruction in the kitchen to that by now infamous exclamation of injustice when Dad didn’t win at the British Comic Awards (below right), through to a rather touching entry on the simple pleasure of eating cheap sandwiches in the street, The Listening Agent is as much about Decie Junior’s commentary on the world around him as it is his dad’s. 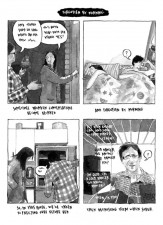 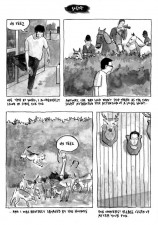 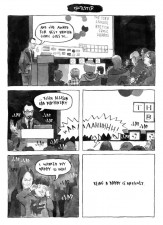 Decie has by now perfectly cultivated his dry narrative presence; one that somehow manages to be consecutively both downbeat and whimsical. That remains his signature style – that ability to have you nodding sagely in agreement on one page as he presents a neat little piece of familiar experiential comedy on the myriad ways to procrastinate when packing up a house while, on another, he’ll be taking you off on another of his extravagant flights of fancy lost in a jungle on the family hols. His visuals also echo that slightly contradictory heart to his work with his unfussy inkwashed illustrative style being rooted firmly in an everyday realism and yet, simultaneously, having a hazy dreamlike quality to it.

For a comics commentator, discussing a Joe Decie book is problematical in the same way that reviewing Lizz Lunney’s work is. They’re creators who have both come up from the small press by carving their own particular storytelling niches and are just so frustratingly and consistently good at what they do that you feel like you might as well just cut and paste the last review every time you cover them. The Listening Agent is another laconic and beautifully understated collection of work from Joe Decie, underlining his undoubted status as one of the most unique creative voices on the current British comics scene.