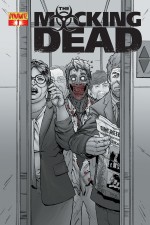 From the New York Times bestselling writer of the Marvel Zombies series comes a gut-splitting (then eating) comedy!

From acclaimed Marvel Zombies writer Fred Van Lente comes The Mocking Dead!  The Mocking Dead is a tongue-in-cheek look at the wildly popular zombie genre, with amazing interior art from Max Dunbar, colored in a unique black, white, and red pattern.  Featuring an incredible and unique design Zombie Caution cover by Bill Tortolini as well as a Subscription only cover from Max Dunbar himself, he Mocking Dead is available in comic book stores and digitally this coming September!

In THE MOCKING DEAD #1, a small outbreak can turn into a worldwide apocalypse… but only through a long string of screw-ups.  Once actual zombies begin popping up in our world, a lone intelligence analyst realizes real-life events are beginning to mimic the events of a long-lost, Grade-Z, drive-in horror flick.  As he races to save humanity with this knowledge, he quickly learns the only thing more dangerous than ravenous walking corpses is the ineptitude of the living!

“If you want to see a different take on zombies and how it would really play out in our world, definitely pick up THE MOCKING DEAD,” says writer Fred Van Lente.  “It’s got laughs and gore in equal measure.”

“We sat down, we pitched Fred our idea, he liked it and came back with his voice.  I cannot wait for fans to read this.  It’s going to be a fun ride!  A fun ride with lots of bites, death, and everything that comes in a zombie story ;-)” – States Dynamite CEO/Publisher Nick Barrucci

“The zombie genre has quite obviously exploded and it’s been asking for something like this for a long time,” says Senior Editor Joseph Rybandt.  “Once we decided to “send it up”, we talked to our one and only writing choice and Fred was able to make it work. Along the way, it became its own thing, still doing what we intended, but growing in complexity due to Fred’s immense talent and Max’s incredible world-building. It’s gonna be a whole lotta bloody fun…” 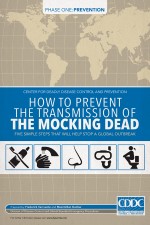 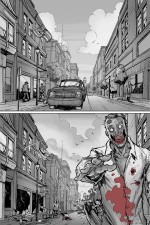 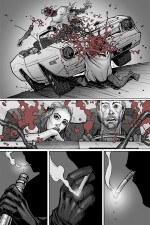 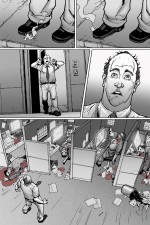 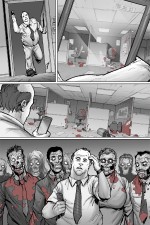