The Terrible Tales of the Teenytinysaurs! is an absolute  gem of all-ages storytelling – vibrant, animated and utterly endearing.

Dave, Ronnie, Natasha, Thomas and Reggie aren’t your usual gang of childhood friends. For a start they are, respectively, a young tyrannosaurus, stegosaurus, triceratops, brachiosaurus and a pteranodon. Dave is the cool kid and the leader of this pack of chums, Thomas is the hyperactive one, and Reggie is the group’s likeable, but not very quick on the uptake, member. Confident Natasha, meanwhile, is the only girl in the crew and is also the object of attention of her secret admirer, the daydreaming Ronnie. 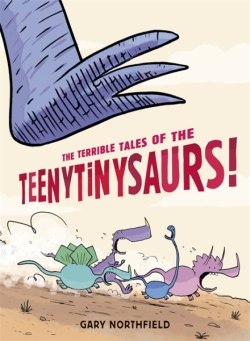 As far as U.K. children’s comics publishing is concerned, writer-artist Gary Northfield has become one of the most reliable mainstays of the industry over the last few years. He’s the chap who was the creator of the much-loved, madcap Derek the Sheep in The Beano, and he’s currently providing regular chortles with the beautifully realised world of Gary’s Garden in the pages of the weekly comic The Phoenix. One of those illustrators whose work you can always count on to be good-humoured, imaginative, and full of a lively and infectious wit.

The Terrible Tales of The Teenytinysaurs! is no exception. Over seven stories and nearly eighty pages we witness our newfound prehistoric pals as they hang out together, becoming involved in scrapes that include the mucus-based antics of a confrontation with the “bogey monster” for Ronnie, a trip through a primeval undersea world when Natasha loses her necklace at the beach, and an attempted voyage to the moon for Dave and Thomas via the sneezing snot-based propulsion system of a giant sauropod with a cold. Yes, there’s lots of bogey-based badinage in this book!

Anyone familiar with Northfield’s work will know what a pronounced sense of energy there is to his cartooning, but in Teenytinysaurs! he displays some of the best work of his career to date. Firstly, what’s of particular note here is that we get to see exactly what Northfield is capable of with this quirky cast of characters in slightly longer-form stories rather than the handful of pages we usually get to see him working with. But, beyond that, the experimentation with his storytelling here is such sheer good fun. The book is interspersed with fantastically detailed and gorgeously coloured double-page spreads throughout, for example. Check out this one below from my favourite story wherein Dave’s little brother Jimmy is accidentally swallowed by Thomas’s giant older brother Colin. The plethora of wonderful visual gags here is inspired… 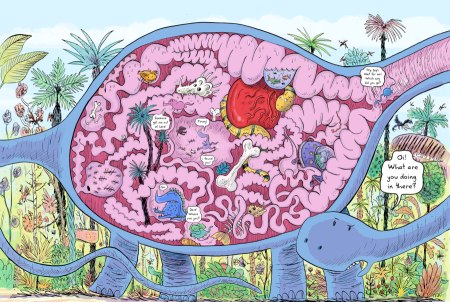 Another double-pager is presented as a board game (below) and there’s an entire section of the final story which recreates the deepest depths of the prehistoric oceans as a kind of bioluminescent wonderland. But, as impressive as it is, all the invention and playful use of the comic strip form only goes so far in Teenytinysaurs!’s success. What gives it that extra level of appeal – that special something that will ensure its target audience of kids will revisit its pages time and time again – is that, quite simply, Northfield knows his readership. Not just superficially in terms of combining the draw to a young mind of dinosaurs with the scatological naughtiness of poo and bogey jokes either. The bottom line is that youngsters picking up this book will identify with the characters herein because they’re kids first and dinosaurs second. However much it’s dressed up in splendid saurian silliness this is very much a comic about seeing the world through a child’s eye view and therein lies its brilliant charm. Old fogeys like me probably hearken back to a lost age of British weekly comics far too often sometimes. Comics for kids in the U.K. are not dead. They’ve just made the transition to a different book-based publishing arena. Their presence there at the moment may be modest but it’s most assuredly one that can only continue to grow under the stewardship of creators like Northfield himself, Jamie Smart, Sarah McIntyre, the Etherington Brothers and so many others doing such excellent work aimed at younger readers. The Terrible Tales of the Teenytinysaurs! is an absolute  gem of all-ages storytelling – vibrant, animated and utterly endearing – I look forward to a second volume featuring these delightfully delinquent dinos as soon as possible.