Breaking into the comics industry is, as anyone who’s tried it knows, a very hard thing to do. But one of those who have managed it in the past few years, and managed it in a big way, is Mark Bertolini, a Canadian writer with work in print from a host of independent publishers.

Mark lives a few miles outside Toronto. Between the two of them, he and his girlfriend have four sons, ranging in age from four to nine. They’re all superhero fans, Mark says, and it’s not hard to guess where they might have picked up that interest. “When you read stuff like Breakneck or Long Gone,” Mark says, “you might get the sense that I hate superhero comics, but nothing could be further from the truth. I just like to pick on things and point certain things out…. I love superhero comics and Vertigo-esque comics, and if you mash the two of them up, you’ll get a fan for life out of me.”

That Breakneck he mentioned is a comic that dates back to early 2011. It is, put succinctly, a very non-traditional superhero comic from publisher 215 Ink, and it recently saw the release of its first trade paperback collection. Illustrated by Aussie artist James Boulton, Breakneck tells the story of D-list supervillain Ethan Shade, living as a fugitive following a massacre of the world’s villains at the hands of a cadre of heroic crusaders. In the months and years since Breakneck, Mark has published a variety of stories in almost as many venues, from a short story in Black Ship Books’ Weird Zombie Horror anthology to 215 Ink’s Ghost Lines, a spine-chilling exploration of brainwashing and false memories. “I like to think I’m lucky enough that any dream project I have,” he told me, “I can work on it and actually create the project.” And judging from his productivity in the past few years, that’s very close to the truth. 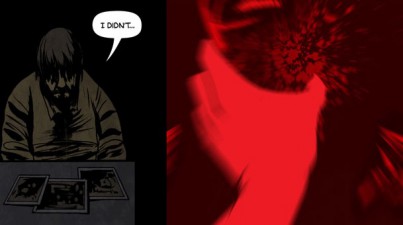 In his writing, Bertolini draws on a variety on influences, citing among the most important Warren Ellis, Brian K. Vaughan, and Jonathan Hickman. Since making his debut with Breakneck, Mark has racked up a body of work that runs the gamut of genres, from superheroes to horror and psychological thrillers.

And Bertolini’s deconstruction of the superhero genre doesn’t stop with Breakneck or the aforementioned post-apocalyptic graphic novel Long Gone. More recently, his title Broken, which recently debuted at 215 Ink, takes an even darker take on traditional superhero tropes. It’s illustrated by Allen Byrns and James Giar, and Mark describes it as his own “twisted take on the origin of Batman…. Broken looks at what horrible childhood trauma would really do to a person.” In case that wasn’t enough of a clue, what it would do is, in this case, none too pretty. 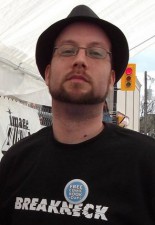 But despite his success and the sheer breadth of his output, Mark isn’t resting on his laurels. Right now he’s trying to find a publisher for El Diablo Rojo, a graphic novel he co-created with artist Valentin Ramon, following a luchador-mask-wearing freedom fighter in the aftermath of the apocalypse. Also high on Mark’s priority list is Instinct, a four-issue miniseries that, even though it hasn’t yet been picked up for publication, has already garnered a healthy amount of interest in a film adaptation. And not to be overlooked is the recently launched (and available on comiXology) Scum of the Earth, a three-part science-fiction/grindhouse movie mash-up that he describes as “southern-fried sci-fi.”

No matter what dark corner of the human psyche he’s exploring, or what genre he’s turning on its head to his own inscrutable ends, Mark Bertolini is sure to remain one comic creator to watch in the foreseeable future. So, start watching now. I have a feeling it’s going to be a hell of a ride.