TITAN COMICS TO PUBLISH IN SEARCH OF GIL SCOTT-HERON, CELEBRATING 50 YEARS OF HIP-HOP 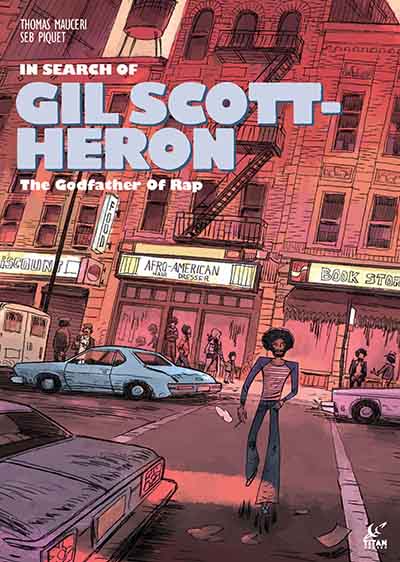 Titan Comics is proud to announce that it will be publishing IN SEARCH OF GIL SCOTT-HERON (ISBN: 9781787740235), written by documentarian Thomas Mauceri, with art from Sébastien Piquet. Published for the first time in English, this graphic novel will be on sale in July 2023, to coincide with celebrations for hip hop’s official 50th birthday.

Singer, poet and writer, and widely considered to be the ‘Godfather of Rap’, Gil Scott-Heron is a legend of the Afro-American music scene, responsible for groundbreaking hits such as “The Revolution Will Not Be Televised” and “The Bottle”. Through his own personal journey, writer Thomas Maucéri discovers what drove Scott-Heron’s initial success, his ignoble downfall, and ultimately triumph return, alongside exploring the complex past and present of the America that created this singular visionary.

IN SEARCH OF GIL SCOTT-HERON follows Maucéri as he attempts to track down the elusive Scott-Heron for an interview that never seems to happen, and in the process examines the music, controversies, and the political and cultural legacy that he created.

Coupled with Sébastien Piquet’s striking art, IN SEARCH OF GIL SCOTT-HERON’s fascinating story provides a unique insight into key events surrounding Gil Scott-Heron, that continued to resonate even after his death.

The release of IN SEARCH OF GIL SCOTT-HERON coincides with the 50th anniversary of hip hop and will include a bonus essay celebrating Gil Scott-Heron’s career and enduring influence on today’s music.

IN SEARCH OF GIL SCOTT-HERON arrives in bookshops, comic shops, and on digital platforms on July 26, 2023. Pre-order now from Amazon (US), Barnes & Noble, and Forbidden Planet (UK/Europe).