First World War anthology To Arms! – a project with its genesis in the Gosh! Comics Process group – self-consciously set out to approach its subject matter with a distinctively alternative mindset. Back in June I interviewed the book’s editors Matt Duncan and Karim Iskander Flint here in this column where they spoke in depth about the genesis of To Arms!, the logistics of putting together a multi-creator publication, and the mix of established UK small pressers and newer talent within its covers. It’s that last point that most intrigued me about this collection and due recognition needs to be given to Steve Walsh of Gosh! Comics in that regard because, without his vision for the Process group, this comic would never have seen the light of day. A true testament to the role of shops like Gosh! in recent years of moving beyond being just centres of friendly comics retail and evolving into hubs of true comics community. 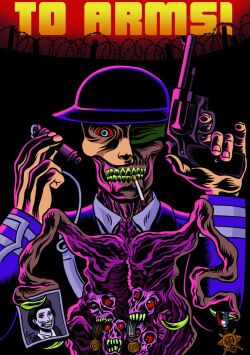 What immediately strikes the reader on a first read-through of To Arms! is that this is a book that, largely, is more concerned with personal experience than the bigger picture of the war. That temptation to overload stories with the horrific facts and figures of World War I to the point of losing sight of the individual stories of those involved is avoided ensuring that the reader has a more intimate relationship with each short tale and feels invested in the events therein.

Milo Shore’s ‘The Greatest Shot in Europe’, for example, examines the pragmatism of British and German troops in the trenches – the practicalities of the tacit “Live and let live” agreements that sprang up and the trading between sides – from the perspective of one sharpshooting soldier. The twist in the tale here reminding me of some of the more thoughtful examples of DC’s war anthology output in the 70s.

Of course, boldly proclaiming that a debut book from a creative collective is looking to provide a take on something as etched in the public consciousness as World War I was a brave statement of intent. There are a number of strips here, though, that do indeed attempt to look at the conflict from an intriguingly different vantage point. Matt Boyer’s ‘I Was a Boy’ (below), for example, is a quiet masterpiece of visual metaphor, reducing the combatants to children on hobby horses with popguns to make an eloquent point about the slaughter of a generation’s youth.

Similarly, Alex Potts’s commentary on the fighting from the avian viewpoint of ‘Robert the Pigeon’ has an elegantly neat concept to it even if the story does tail off a little at the end. Nick Jobbings’s ‘The Architect of War’ is also emblematic of that attempt to look at the war from unconventional angles with a beautiful and quite haunting rendering of Edwin Landseer Lutyens’s creation of the Cenotaph. This is echoed in Richard Worth and Jordan Collver’s two-pager ‘The Accidental Propagandist’ centring on how Arthur Machen’s fictional account of spectral archers helping British soldiers at the Battle of Mons was adopted as a piece of rallying wartime misinformation. 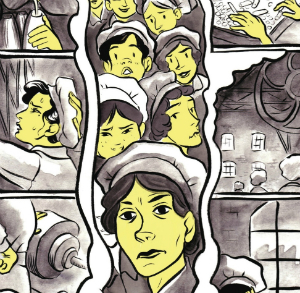 Of the newcomers (to me anyway) Jess Milton’s ‘Canary Girls’ (right) – a reflection on the women on the homefront who worked in the munitions factories – may be slight in narrative but shows a firm understanding of the possibilities of the form in terms of page design and an intelligent use of colour to create mood and layered meaning. Elsewhere, Michael Lightfoot’s art on Matt Duncan’s ‘Au Clair de la Lune’ has a gritty, yet retro, look to it that is highly evocative in its final pages as the lives of two soldiers in the trenches are juxtaposed with unseen events at home. Co-editor Karim Iskander Flint proves to be one of the revelations of To Arms! Some, no doubt, may find the black humour of his suicidal, glory-hunting protagonist The Man Who Gets Shot Down a Lot to have a degree of questionable taste to it but it remains highly representative of the tradition of dark humour that has so deftly characterised the futility of the Great War; Blackadder Goes Forth and Oh! What a Lovely War! being the obvious examples. Daniel De Sosa’s art has a suitably morbid slapstick to it on this short.

Small press mainstays familiar to ‘Small Pressganged’ readers abound in these pages. Owen Pomery’s ‘Last Laugh’ (below) is both darkly comedic and utterly horrifying. It’s one of the highlights of the anthology, with the stark contrasts of its black and white art accentuating the story’s tone and mood. As ever, Jessica Martin shows her innate understanding of the possibilities of the comics page in ‘Tommy in Bloomers’, the fascinating true account of the life of “Sapper Dorothy Lawrence”, the British journalist who pretended to be a man to join the fighting. Well-paced and structured, Martin effectively encapsulates a remarkable life in just seven pages. And what more can I say about the pensive work of Mike Medaglia that I haven’t said already in the last year or two in this column? His ‘Night and Day’ says more about the senselessness of the First World War in just two single panels than some manage in entire books.

Normally with an anthology it’s relatively easy to select a handful of high spots to put front and centre in a review but To Arms! positively teems with stories that either have interesting points to make or exhibit clever uses of the form. Keith McDougall’s frenetic cartooning on his history of World War I in relation to the Avant-Garde art movement; the dreamlike imagery of Sajan Rai’s ‘White Feather’; the ominous foreshadowing present in Steve Walsh’s collaboration with the insanely talented artist Tim Hassan on ‘The Greatest Experience’ (see top two images); the poetic narrative and lingering visuals of Lauren L. Murphy and Francesca Dare’s astonishingly evocative ‘The Youth Are Still Doomed’; and Clare Wood’s poignant rumination on naivety and fatal inevitability in ‘Picnic, August Bank Holiday’ (below). All are fine examples of the diversity and range of this book.

The final longer form work is Matt Duncan’s ‘Strange Meeting’ which may adopt a familiar premise with its tale of an ethereal encounter after battle –and provide reminders of Lucien’s library in The Sandman at the same time – but works as a most appropriate finale to the book, emphasising the lost potential of the conflict so evident through the previous 80-odd pages. And that’s where To Arms! succeeds so well as a collection of work. It focuses on the humanity of both “ordinary” participants and their more celebrated counterparts first and foremost, ensuring an empathic link between audience and on-page events, and playing to the strengths of the medium to communicate emotional impact and bring home the pointlessness of a war that became just one in a long line of duplicitous conflicts. An impressive group effort from a mostly less experienced group of creators and a worthy nod to the philosophy of the Process group at Gosh!.

To Arms! is available from Limehouse Comics here priced £7.99. For more on the Gosh! Comics Process Group visit the Gosh! site here.