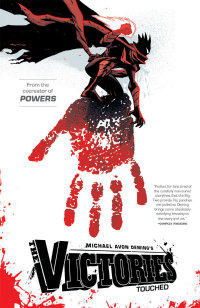 Mike Avon Oeming is the co-creator of two unique series in recent times (Powers and Mice Templar), and here he’s let loose with a story all his own.

And what a dark story it is. This is a mature readers story, with nudity, violence, and profanity scattered throughout the almost 140 pages, but before you roll your eyes at yet another “mature” take on superheroes that is just an excuse for the aforementioned diversions, be aware that The Victories: Touched isn’t just another Mark Millar wannabe.

This Trade Paperback collects the complete five issues of The Victories miniseries for only $10, and it has now become an ongoing series, with the first two issues of the second volume also available now.

The opening pages introduce us to the perverse, masked Jackal as he beheads a judge in front of his wife, but Faustus of the hero team the Victories arrives moments later. What follows is the spraying of much blood and multiple swear words.

Early reliance on the typical news reports and man on the street interviews help build the world, and let us know that the controversial battle between various vigilantes has been going on for some time, and the drug in the city called Float isn’t helping matters. Thankfully, that often used expository device soon makes way for something more fresh, as secrets and hidden memories begin to surface with an unnerving momentum that you know just can’t end well.

Former villain Link is forcibly recruited to ascertain the whereabouts of the bribes from the dead judge’s lawyer, but Link and his new criminal associates are stopped by Faustus. When the hero is briefly touched by Link, the psychic learns a secret about Faustus; a secret that will lead to tough choices and a climactic showdown.

We briefly get to know Faustus’ mentor, as well as his teammates Sleeper, Sai, D.D. Mau, and Lady Dragon, as they easily finish a drug bust, and former hero Strike, but it’s truly Faustus’ story. His great, noir-like thoughts as he broods over cityscapes increase the dramatic tension and blur the line between a hero’s duty and a victim’s desire for revenge.

To say any more would rob the appeal of discovering The Victories for the first time. It could easily have been something that jaded superhero fans have seen a lot of in the last twenty years, but Oeming steers it away from the shock value and constructs a genuinely enthralling tale that never feels rushed despite its heavy subject matter and ambiguous exploration of heroism versus humanity.

Oeming’s style relishes in his unmistakable artistry, which for the uninitiated is somewhere between Bruce Timm and Mike Mignola, but rougher than both, which is fitting for this dark adventure. With Nick Filardi’s colour choices adding great richness and depth, it becomes a very pretty book, despite the often ugly proceedings. Oeming’s passion for this story, and desire for experimentation is obvious, and it’s also certainly one of the most…extreme stories Dark Horse has published, but one look at the sketchbook filled with unused concepts in the last few pages reveal how far it could have, but thankfully didn’t, go.

For only $10 The Victories is well worth a look. It’s an intense and different approach to superheroes and shows that throwing on a costume and taking up a unique name doesn’t automatically conceal painful memories.