It comes from Italy, but the new biannual anthology Under Dark Weird Fantasy Grounds (edited by Michele Nitri) could come from hell or from the centre of the earth, as the comics by Mat Brinkman, Miguel Angel Martin, Ratigher, Tetsunori Tawaraya and Paolo Massagli lead to unknown and terrible lands.

The prologue to this unusual reality is in the six pages by Mat Brinkman, the founding member of the Fort Thunder artists’ collective and author of Multiforce and Teratoid Heights. Brinkman is a sort of guest star here, since he isn’t a prolific cartoonist at the moment. We saw his work last year in the Monster anthology, published by the Hidden Fortress Press of Paul Lyons, and he’s contributed to the fifth issue of Weird, edited by Noel Freibert. 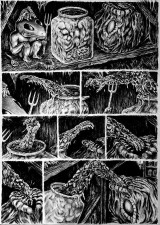 In Cretin Keep On Creepin’ Creek, he uses a wordless approach to tell the adventures of an animated and monstrous arm, tortured by some strange creatures in a sort of basement. The drawings are visceral, apparently raw but with a remarkable visual complexity.

The tale also has a greater sense of structure and an extraordinary dynamism compared with Brinkman’s other comics: this time the cartoonist guides the eye of the reader, which isn’t free to skip between different points of the page, as in Multiforce.

Brinkman’s art grows year after year, and when small, dense panels make way for a wider view, it’s a joy for the eye. As with all the comics in the book, this is a first part, with a follow-up due in the second issue of the anthology. 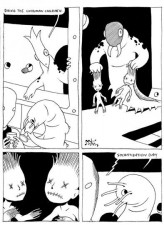 Miguel Angel Martin and Ratigher share the underground setting with Brinkman. These are two similar stories, in which the characters move in a sort of dungeon, akin to the setting of a role-playing game.

However, The Emanation Machine and Five Mantles are anything but classical fantasy tales. In the first, Martin’s art and storytelling are at their best. A strange creature dies while giving a mysterious object to the two protagonists. It’s the key for the emanation machine – “a subhuman fantasy”.

Actually the main theme – as is usual for Martin – is sex: every action or event is a fantasy version of a sexual practice or perversion, creating a sense of claustrophobia that is also present in Ratigher’s contribution, which has more text and a more structured plot. 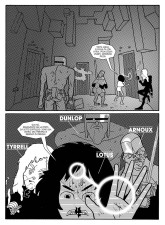 Here the characters try to find an escape from an infinite series of tunnels. They can’t remember why they’re underground, but they have two magical mantles (or cloaks) that can help them literally to rise from the darkness.

Ratigher’s style is significantly influenced by manga, while the real Japanese author in the anthology, Tetsunori Tawaraya (top), looks more in the tradition of monster movies. In The High Bridge, bizarre creatures fight in a marine environment without uttering a word. In most panels the backgrounds are empty and Tawaraya concentrates on the monsters, which are depicted with amazing skill.

A good thing about UDWFG – published in a hand-finished limited edition of 700 – is that all of the comics share a feeling while each author has his own style. This is confirmed by Paolo Massagli, who ends the book with a free-form comic. 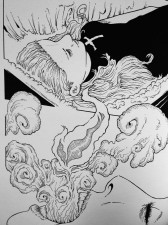 Hell is a wild trip to the infernal lands, where the pages are filled up with the white skin of the female protagonist – a dead young girl in search of an earth, maybe to escape from hell or maybe to live again.

As in Tawaraya’s work, the attention is all on the bodies and not on the background, but here the focus isn’t on wings, horns and tentacles but on breasts, lips, eyes and long eyelashes, giving the book a touch of sensuality that had been missing until this moment.

It’s rare to close a comics anthology with a well-defined feeling. UDWFG, at 96 magazine-sized pages, leaves a sense of pain, mystery and wonder – and also the strong desire to read the second issue, due at the end of September.