Witty, willful, wily, and wise, Wonder Woman is consistently the best New 52 reboot in the entire DC line-up—and you should be reading it.

Too often writer/artist team-ups result in a comic lacking balance. A title with a strong story may have art that struggles to convey all of the subtleties the writer requested (or didn’t know to request) or the artist may hit a home run with the character portrayals, but the plot lacks substance and the story stagnates. It happens.

But not with Wonder Woman. The happiest marriage of writing and art in comics today is coming from creative team of Brian Azzarello and Cliff Chiang. These sick geniuses are quietly producing one of the most stunning comics on the shelves.

Azzarello’s plot reveals its twists and turns through the actions of individuals as they set off chains of events seemingly woven by the Fates themselves. And it works because each character—man or god—is fully realized with strengths and weaknesses that are available for all to see. Azzarello writes big depth into the characters in seemingly small ways. Wonder Woman maintains her commitment to believing in the people around her, and appears to slowly be repairing her relationship with Hermes. It’s a small point of continuity in her personality that despite her considerable individual abilities, she still seeks the council and assistance of others. 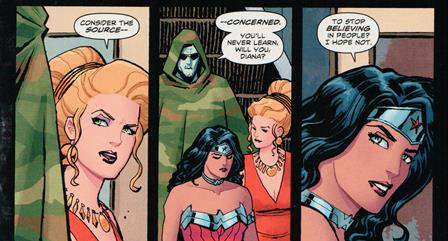 It’s Chiang’s art that gives you the subtle clues to understand that something much bigger than the current scene is really at play. Small looks between characters or changes of facial expression give away the existence of an overarching plot that we just can’t see yet. It’s the best kind of thought-provoking eye-candy to search for those plot points within the immediate action playing out among the characters.

Issue #28 smoothly advances the seemingly divergent storylines. Artemis leads the hunt for Zola and Zeke. Dio takes on the Minotaur and loses. Zola realizes that Dio was the target all along and follows the Minotaur as he drags Dio back to Cassandra’s plane. Cassandra insists that Dio take her to Olympus, and he complies with a wise crack, “It will be my pleasure to serve as your escort…and to introduce you to Apollo…and to watch him squash you like a bug.”

Apollo continues his merciless torture of the First Born, who, after being charred to a crisp and bound in chains, calmly says, “I have burned since the day of my birth. This is nothing new.” Apollo isn’t winning their fight, but does manage to bring the book to an explosive conclusion.