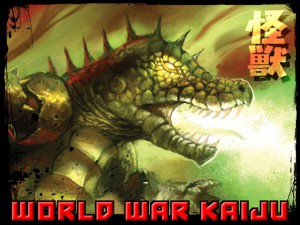 The graphic novel that asks, “What if Doctor Strangelove created Godzilla?” hit its Kickstarter minimum goal of $15,000 two weeks early!

With two weeks left on the clock before its Kickstarter campaign concludes, WORLD WAR KAIJU hit its mission critical goal of $15,000.
Created by author Josh Finney (Titanium Rain, Utopiates) and illustrated by Patrick McEvoy (Call of Cthulhu, Game of Thrones), WWK is the story of an alternate history in which the atom bomb was never created and the ultimate doomsday weapon is the kaiju—fifty foot tall radioactive beasts spawned from the mysterious KAI-235 isotope.

“We’re absolutely thrilled by how supportive the kaiju, anime, and comics communities have been of the project,” said Finney. “The hope now is that within the next two weeks we can hit our first major stretch goal.”

The stretch goal he is referring to is the $25,000 benchmark. At that level of support, Team Kaiju will be able to include both parts one and two of the series. Or as McEvoy put it, “Once this goal is unlocked everyone’s copy of World War Kaiju will double in length and contain twice as much story content!”

WATCH THE ANIMATED TRAILER
See the animated trailer and read the first 17 pages of the book at http://worldwarkaiju.com/downloads/

ABOUT THE GRAPHIC NOVEL
World War Kaiju is a tribute to the kaiju genre in all its forms (both high and low). This story would never have been possible if not for the visions of Ishiro Honda, Eiji Tsuburaya, Shinichi Sekizawa, and Willis O’Brien. The brainchild of sci-fi author Josh Finney, WWK is a love letter to the golden-age of the kaiju cinema. Brought to life on
an epic scale by renowned fantasy artist Patrick McEvoy, it looks back to an era when the world loved atomic monsters, but feared the atomic bomb, and warps history in ways that only men in rubber suits can.

Support the Kickstarter campaign at: http://www.kickstarter.com/projects/309827462/world-war-kaiju-graphic-novel