Writer(s): Brandon Barrows
Artist Name(s): Ionic
Cover Artist(s): Ionic
Synopsis: Private investigator Jack McGriskin is a magnet for trouble–and this time it’s a doozy.
Businessman Eddie Newman is dead and Jack has suspects, but can he make the charges
stick? And more importantly, can be live long enough to? Stalked by a super-powered killer,
Jack’s time is running out! Variant covers by Brett Weldele (The Surrogates) and John “Super
Ugly” Williams!
1 in 5 variant cover by Brett Weldele
1 in 5 “Ugly Love” variant cover by John “Super Ugly” Williams
32 pages/ All Ages     $2.99 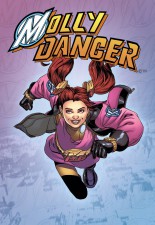 OFFERED AGAIN! She’s the hero you’ve been waiting for! Eternally

child-like and inhumanly strong, Molly Danger has protected the citizens of the once
sleepy town of Coopersville, New York for the past 20 years from the terror of the
sinister Supermechs. But what secrets from her past threaten to destroy everything
she holds dear when new D.A.R.T. recruit Austin Briggs becomes her pilot?
•Written and drawn by Inkpot award winner Jamal Igle (Supergirl, KISS, G.I.Joe)
•All ages action adventure
•Great for fans of Ben 10, The Powerpuff girls and Cardcaptor Sakura
48 pages/ All Ages             $19.99  9″x12″ Hardcover Album

PIRATE EYE VOL.1 TPB
Writer(s): Josiah Grahn
Artist Name(s): Carl Yonder
Cover Artist(s): Carl Yonder
Synopsis: Once a pirate with a keen eye for finding wealth in unlikely places, Smitty now
lives exiled from the sea. Landlocked, he has carved out a new niche as a “finder,” a man
who, for a price, will utilize the same skills that served him as a treasure-hunting
scoundrel to unearth any item, person, or secret. As his reputation and caseload swell,
Smitty must contend with the gangster who all but rules his new hometown, a dangerous
collection of local brigands and politicians, and the pall of threats from old enemies.
Through it all his focus on what he values most-his own success-never wavers. Though
his circumstances have changed, in his chest still beats the heart of a pirate!
Special Notes: Collects the first four issues of the quarterly Pirate Eye comic. An all-new
cover!
128 pages/ Rated PG      $11.99

Writer(s): Jeremy Whitley
Artist Name(s): M. Goodwin
Cover Artist(s): M. Goodwin
Synopsis: Be there for the epic conclusion of the first Princeless story! Adrienne and Bedelia are
in deep trouble with the city guards, but they’re not about to back down! Fisticuffs will be had!
Hijinks will ensue! Stereotypes will be challenged! Princeless! Variant “Ugly Love” cover by
John “Super Ugly” Williams!
1 in 5 variant cover by John “Super Ugly” Williams
32 pages/ All Ages    $2.99