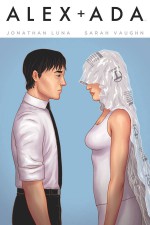 After three years away from comics, Jonathan Luna (Girls, The Ssword, Ultra, Spider-Woman: Origin) is back, drawing and co-writing ALEX + ADA with Sarah Vaughn (Sparkshooter). In this near-future tale, Alex is attempting to recover from a setback in his life and return to normal. Ada, a Tanaka X5 and the latest and greatest model of companion android, comes into his life. She lives to serve, as long as her programming allows it, but does he want to be served?

The world of Alex + Ada gives us a glimpse of what our own future may be like. It features a thriving robotics industry, alarm clocks that are floating holographic displays, breakfast served by floating robots, and normal human beings who are able to control their home electronics with a thought. Vaughn says that readers can expect “drama, humor, love, loss, and more robots than you can shake a stick at” in the series.

Luna took a break from comics after the finale of The Sword, producing an illustrated prose book named Star Bright And The Looking Glass in the interim, but he’s excited to be back at the drawing board. “It’s so great. I feel like I’ve lost some time, but at the same time I’ve learned so much in the past few years from photography, painting, Star Bright, and life experiences. I’m reinvigorated and I feel so fortunate to be working in comics.”

When asked to describe their working relationship, Vaughn said, “It looks a lot like Misery. I ended up having to hobble Jon. All kidding aside, we’ve been able to reach a good balance between our friendship and creative partnership.” Luna, too, praises his co-writer: “Sarah is a good friend first and I never would’ve guessed that we’d be working together in this capacity. I’m very glad that we’re able to. It’s all been a very pleasant surprise.”

Both creators debuted Alex + Ada in an interview on Comic Book Resources, discussing both Luna’s break from and return to comics, the research required for Alex + Ada, and their working process. Follow both creators on Twitter: @jonathanlunacom and @sarahvictoriav.

ALEX + ADA #1 will be in stores on November 6 and can be pre-ordered from the September issue of Previews (SEP130479).