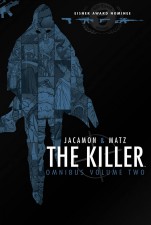 Retirement never lasts for a hired gun. This July, Volumes 3 and 4 of the Eisner Award-nominated series THE KILLER are collected for the first time ever in the definitive THE KILLER OMNIBUS VOL. 2 by Archaia, an imprint of BOOM! Studios. Originally published as a five volume series in France from 1998 to 2003, Le Tueur (THE KILLER) quickly became known as one of Europe’s grittiest and most hard-boiled comics—a brutal, bloody, and stylish story of a professional assassin lost in a world without a moral compass. The creative team of artist Luc Jacamon and writer Matz (CYCLOPS) continue their story of one assassin’s journey through a world of relentless violence. Though his brief retirement has not dulled his skills or resolve, new jobs will threaten his way of life and the very foundation of his morality.

“From the day it hit shelves in America, THE KILLER has not only been one of my favorite Archaia titles, but one of my favorite comics period,” said BOOM! Studios Editor-in-Chief Matt Gagnon. “We can never get enough hard-boiled crime stories at BOOM!, and this series is the heart of European crime comics. Luc Jacamon and Matz have created a powerful story about a man with blood on his hands, and the moral struggle that comes with it.”

THE KILLER OMNIBUS VOL. 2 softcover collection arrives from Archaia in comic shops on July 23rd with a cover price of $24.99 under Diamond Order Code MAR140977.