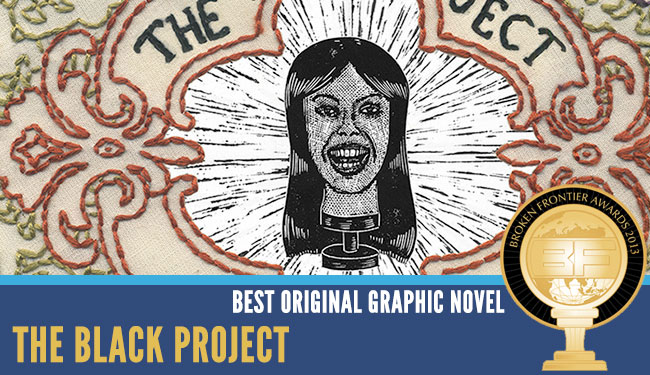 In this year’s Broken Frontier Awards, British creator Gareth Brookes had the Best Original Graphic Novel category sewn up with The Black Project, his frank, funny and painstaking look at male adolescent sexuality.

Gareth Brookes has been a prolific presence on the UK small press scene for years, from the stick-figure humour of Man Man and Friends (and Woman Woman) to the laugh-out-loud nature poetry pastiche of The Smell of the Wild (which has a hard-won spot in my loo-side library, wedged in between Baudelaire and Leonard Cohen).

However, 2013 was the year in which he stepped up to comics’ top table. His stunning book The Black Project (the winner of the First Graphic Novel Competition run by its eventual publisher, Myriad Editions*) has surfed a wave of acclaim since its publication earlier in the year, and now it has picked up the ultimate accolade – the Broken Frontier Award for Best Original Graphic Novel. 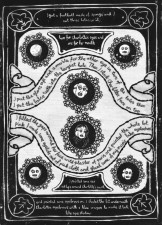 Like all the best comics, The Black Project blends its substance and form to tell a story in a way that other mediums can’t approach.

However, one of the things that make this work remarkable is the mash-up of techniques that Brookes uses to tell his story – a medley of linocuts and embroidery that took its creator four years to complete.

The Black Project is a sometimes disquieting but often very funny look into the murky nascent sexuality of a young adolescent boy, Richard, set against the backdrop of middle-class, Middle England suburbia in the early 90s.

However, Richard’s desire for intimacy pushes the objectification of women as far as it can go. Using admirable levels of invention, he builds a series of ‘girlfriends’ from household items, while going to extraordinary lengths to prevent his creations being discovered. 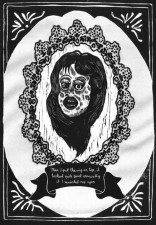 Richard’s affectless, unblinking and uninhibited narration of his exploits is often startling, but is presented with such sincerity that despite its strangeness, it never alienates the reader. There’s also a weirdly touching irony between the grotesque nature of his creations and the affection and protectiveness he feels for them.

Brookes uses the unique medium of his work to create some neat narrative tricks. On a few occasions he shows us the back of his embroidery workings, reinforcing the book’s subtext that there’s something a bit more messy going on behind the orderly facade of suburbia than we might suspect at first glance.

In the year that we lost Iain Banks, it’s fitting that a new piece of work has arrived with a familiar blend of darkness, humour and imagination. With its convincing and unsettling depiction of the mental tickings of a strange young man, it’s not overstating the case to say that The Black Project resembles nothing so much as a very benign Home Counties version of The Wasp Factory. Congratulations to Gareth Brookes and Myriad Editions.

(*The Black Project is also available digitally from Sequential.)