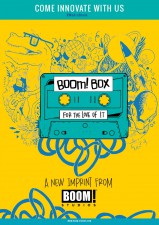 Award-winning publisher BOOM! Studios is excited to announce BOOM! Box, a new imprint that aims to push the envelope with experimental content from some of the brightest, forward-thinking creators in comics today. The new line of titles kicks off in December with the debut of THE MIDAS FLESH, a new, original series from the creative team behind the KaBOOM! line of ADVENTURE TIME comics, writer Ryan North and artists Shelli Paroline and Braden Lamb. BOOM! Box joins the publisher’s other imprints, which include KaBOOM!, BOOM! Town, and Archaia.

“This imprint is about new ideas and unique ways of doing things,” said BOOM! Studios Editor-in-Chief Matt Gagnon. “Shannon Watters, our mastermind editor behind ADVENTURE TIME, REGULAR SHOW, and BRAVEST WARRIORS, has brought some amazing talent into BOOM! over the last couple years. These are creators that have inspired us; they have an undeniably energizing spirit to what they do, and all have their own stories to tell. That jump-started the idea to give them—and other great creators we’ve come to know who aren’t involved in KaBOOM!—the opportunity to go wild and come up with their most outrageous ideas—and for us to say, ‘Yes, we will publish that.’ It’s about experimenting, having fun, and embracing the limitless form of comics.”

BOOM! Box titles will vary in genre, tone, format, and creative vision, but will share a gleeful energy focused on creating comics purely “for the love of it.” The imprint will also focus on introducing successful creators from outside the direct comic market into the traditional print comic market, including web cartoonists, illustrators, and fine artists.

“BOOM! Box is meant to be a gleeful space for creators to explore projects that are exciting or challenging for them, as well as giving them the means to do so,” said Editor Shannon Watters. “We’re interested in publishing comics under this imprint that are a ball to read…no murderbots or male protagonists with a tortured past, perhaps, but dinosaur planets and adventuring best pals and plenty of graphic storytelling made with love.”

BOOM! Box will launch in December with the release of THE MIDAS FLESH #1, a sci-fi adventure taking inspiration from the mythological man who could turn everything he touched into gold. Inspired by a strip from Ryan North’s immensely popular webcomic, Dinosaur Comics, THE MIDAS FLESH follows a space crew as they return to Earth—a planet that has been completely sectioned off, abandoned, and transformed into gold—in the hopes of finding something to help fight a merciless Federation from further expanding its wrath across the universe.

Future series and projects from BOOM! Box will be announced in coming months as the imprint is carefully curated and expanded organically.