This year’s shortlist for the British Comic Awards has just been released providing a telling reflection of the robust creative health and rich diversity of the art form on these shores in the last twelve months. The complete press release is published below, with details of all of the worthy nominees in each category, but if you’ll forgive the indulgence we thought we’d chip in with some brief BF commentary on it as well. 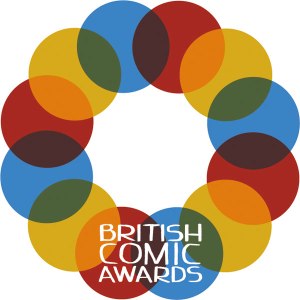 It’s always pleasing to see work you’ve enjoyed as a reader getting the acknowledgment it deserves. In that regard the shortlist contains many favourite creators and comics covered by the Broken Frontier team of late with a number of projects that we’ve championed on the site in the past. For example, as the gent behind our regular ‘Small Pressganged’ column here at BF, I was absolutely delighted to see the name of Jade Sarson on the Emerging Talent nominees. I first marked Jade out as a creator to watch when I reviewed the londonprintstudio interns’ Parallel Lives anthology here last year and I believe we were the first site to cover the print edition of her Cafe Suada series here which I went on to include in my annual ‘Ten UK Small Press Comics You Need to Own’ feature for 2012. You can also hear Jade talking about her illustration work in my recent interview with her here.

And, in more general terms, if you’re interested in what the BF staff have said about some of the other nominees then do check out the following Broken Frontier review links:

Let’s forget about winners, runners-up and nominations for a moment, though, because to a certain degree those definitions are almost irrelevant when considering what these awards really achieve in raising consciousness about the wealth of British material published since last year. Just look at the long list of books the BCA published recently and you’ll realise that what we have here is a celebration of the current state of comics creation in the U.K. in its entirety. While that traditional newsagent platform for the medium may be in its final death throes we are in the midst of something of a golden age for British self-publishing/small press/micropublishing (choose whichever term you’re most comfortable with), the ever burgeoning number of publishers committed to graphic novel output has seen sequential art achieving the literary recognition it deserves and, perhaps most importantly of all, the likes of Walker Books, Flying Eye, the DFC Library and The Phoenix have ensured that a whole new generation of readers are experiencing all that comics have to offer.

Here’s that press release in full and congratulations to all the nominees!

The British Comic Awards committee are very pleased to announce the shortlist for this year’s Awards. The shortlisted titles for each category were decided by the committee of 9 comic industry professionals and academics from 100s of eligible titles submitted by the public as well as publishers and the creators themselves. This year’s nominees are:

And the second entrant to our Hall of Fame will be Leo Baxendale.

The nominated titles will now be passed over to our panel of judges who will decide the winner for each category except the Young People’s Comic Award which is chosen reading groups of young people from schools and libraries around the UK. 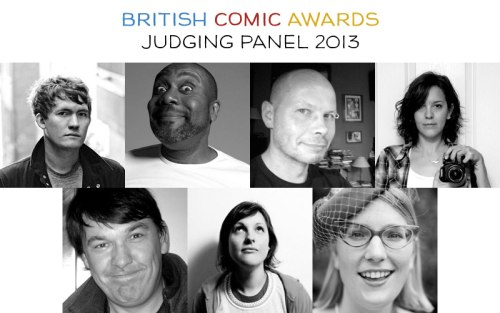 This year’s judges are:

The 2nd Annual British Comic Awards Ceremony will take place Saturday 23rd November as part of the Thought Bubble Festival in Leeds (venue and time to be announced). Now in it’s seventh year, the festival will take place in a variety of venues across the city from 17th – 24th November, with a huge 2 day comic convention at the Royal Armouries on the 23rd and 24th.

Thought Bubble is the UK’s largest annual event which celebrates sequential art in all its forms and caters to both long-time comic book fans and those who have never picked up a graphic novel before.

The British Comic Awards is an annual celebration of the very best comics made in Britain over the past twelve months. The Awards aim to recognise and promote to a wider audience the finest examples of storytelling in this most underrated of mediums. For more about the Awards please visit www.britishcomicawards.com.