On one side we have Judge Dredd: an American anti hero written by the finest UK creators. On the other side we have Blueberry: the stereotypical western hero created by one of mainland Europe’s finest comics team. Let the match begin!

As it happens, both the latest Dredd epic and Blueberry reprint landed on my desk almost simultaneously and since straight up reviews can become a bit of a drag. We’ll pit Judge Dredd: Trifecta against Blueberry: Chihuahua Pearl & The Man Worth $5.000 in a bare knuckles review fist fight.

Judge Dredd represents the shoot-em-up anti hero pioneered by Clint Eastwood’s Dirty Harry and Charles Bronson’s Death Wish series filtered by the sensibilities of a stream of British creators, though the American born – but emigrated to Scotland when he was 12 – creator John Wagner still holds the reins as being the best of Dredd’s many scribes. Blueberry started out as a regular hero western with an edge but in the best run of the book, creators Jean Giraud and Jean-Michel Charlier gradually transformed him into a loner on the run, humorous and scruffy and with slightly dubious morals. If Dredd got his hands on him, it would be at least a 70 year stretch in the cubes, safe to say.

Due to the stereotypes involved, both men tend to be on their best behavior when they have a cast that they can rip and play off on. Judge Dredd: Trifecta even overplays its cast in this light being more of a tale about the Mega City post-Day of Chaos than a tale about Dredd. It interweaves three storylines where Judge Dredd tries to root out a traitor in the department bend on overtaking Mega City One, undercover Wally Squad Dirty Frank investigates the criminal doings of the lunar enterprises of Overdrive Inc. and gum shoe Wally Squad Jack ‘The Simping Detective’ Point is back dealing with the Church of Simpology. So that’s a rather large cast right there. 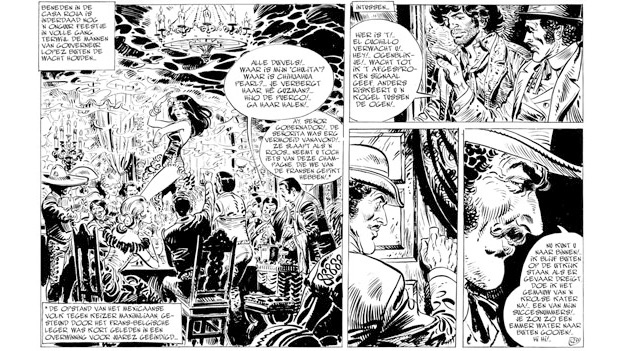 Blueberry: Chihuahua Pearl & The Man Worth $5.000 deals with the search for a mysterious hidden treasure of Confederate gold in 1869. Mike Steve Blueberry gets caught up in a scheme by the government to locate the missing gold and gets mixed up with beautiful spies, Mexican outlaws, scheming landlords on-the-run confederate soldiers. It is the start of a five-album epic and sets into motion the transformation of Giraud’s and Charlier’s classical western hero into the more modern anti-hero. It’s a rollercoaster ride where Blueberry stumbles from one situation into another with a cast at least the equal of Dredd’s Trifecta.

Both albums succeed admirably in converging multiple storylines working their way toward one common goal though their structures differ wildly. Trifecta was serialised in the 2000 AD Magazine with all storylines starting out seemingly unconnected, converging later on and culminating into one big issue where everything collided. Chihuahua Pearl starts from the mystery of the missing gold and draws in all the players en route. Outlaws gather and drift apart with Blueberry often on the sidelines, draw up their own plans and encounter each other in the apotheoses in The Man Worth $5.000.

In terms of story, both take a rather straightforward route to their goal. Trifecta draws upon the surprises of the interconnectedness while Blueberry gets his kicks from writer Charlier who enjoys veering off into unexpected directions, throwing Blueberry in one hopeless situation after another. 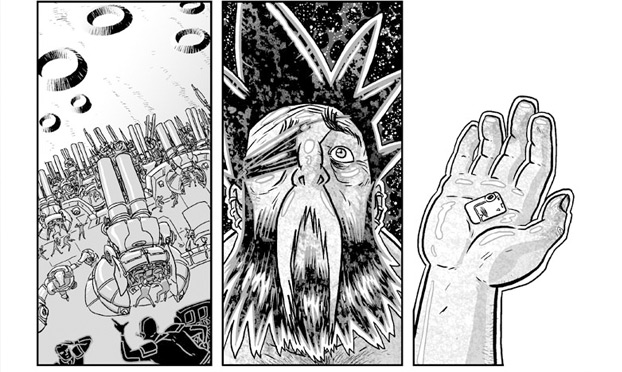 Judge Dredd: Trifecta is a solid sci-fi action story with the borderline insane Wally Squad operative Dirty Frank stuck on the moon amidst the mad enterprises off the megalomaniacal CEO with a shark’s head Overdrive coming off as the best part. Rob Williams’ fast story with some splendid madcap dialogue infuses a manic energy into the Trifecta plot and coupled with the grandiose lunar scheme and sci-fi tropes infusion, everything just clicks and transmogrifies into a grandiose and kooky story. d’Israeli turns in his usual stunning art job and illustrates it all with verve. 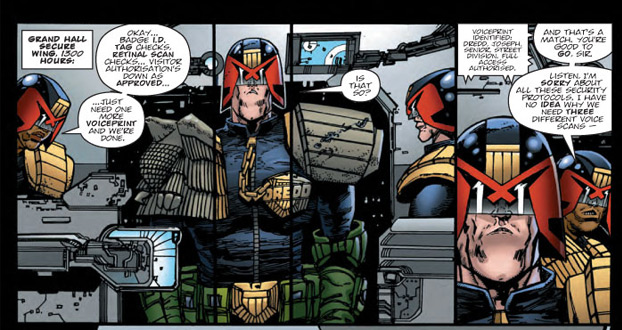 Al Ewing’s story of Dredd fighting the insurrection of Judge Bachman who wants to turn all of Mega City into mindless drones worshipping the God City also turns a fast and loose framework for the whole of Trifecta, providing a solid background and infusing plenty of intrigue to keep the reader on its toes. Henry Flint’s Carlos Ezquerra filtered by a speed tunnel on acid take on Dredd never disappoints and handles the large cast rather well.

Simon Spurrier’s and Simon Coleby turn out a story featuring the beloved Simping Detective and his infiltration of the Church of Simpology and comes out as the worst of the bunch. Coleby’s art is simply not suited for the Simping Detective’s absurd look on life. The uber realistic approach Coleby does so well loses its shine on the subject matter. Co-creator Frazer Irving‘s art featured a splendid contradiction between the inherent violence of the Mega City and the random absurdness off it all with bright colours clashing with the brutality of life in the future. Here though, Coleby’s art flattens the irony and makes it all straightforward. This approach is enforced by Spurrier who turns in an overly wordy script with a truly miserable Jack Point that fails to captivate except for the mad ideas Spurrier turns in for the Church of Simpology.

Blueberry on the other hand sets the standard for how the anti-hero in the western strip should be handled. Published in 1970, Chihuahua Pearl is the key point in the evolution of Blueberry from cliched western hero into the lovable rogue and anti-hero he would become most known for. Published by Sherpa in a beautiful oversized hardcover, it showcases Jean Giraud aka Moebius in glorious black and white. His stunningly detailed vistas of the open plains of the wild west, the grubbiness of its frontier towns and the tough life of the characters are etched in visible detail on their faces. It is actually the second deluxe edition in this series, the first being the double parter The Ghost of the Goldmine which I discussed right here. Chihuahua Pearl & The Man Worth $5.000 is even grander in scope and ups the ante considerably introducing more characters and a more complex story. Highly recommended.

Judge Dredd: Trifecta by Rob Williams, Simon Spurrier, Ian Edginton, Henry Flint, D’Israeli and Simon Coleby is published by 2000 AD. It is a 176 pages full colour hardcover and retails for £19.99.

Blueberry: Chihuahua Pearl & The Man Worth $5.000 by Jean Giraud and Jean-Michel Charlier is published in Dutch by Sherpa. It is an oversized deluxe hardcover counting 104 pages in black and white and retails for €49.95.