Make no mistake, this book is not a fluke. This is not one of those times when an editor decides that they need a minority character on their new heroes team to show they’re in tune with the real world and that diversity isn’t just an afterthought.

Ms Marvel is very much for real. The comeback book of both G. Willow Wilson and Adrian Alphona, it stars Kamala Kahn, a teenage Muslim who takes on the mantle Carol Danvers left behind when she rose in rank and became Captain Marvel. Rest assured that Wilson, herself Muslim, will do the new character justice and not make her a walking parody. Wilson demonstrated on Caïro and Air that she’s got a knack for creating intriguing female characters, so expect Kamala to become a cool, fresh young voice in the Marvel Universe. And Alphona? Remember Runaways? ‘Nuff said.

Lobster Johnson: Get the Lobster #1

Get your hardcore noir on as The Lobster returns! Drawn by stellar talent Tonci Zonjic of the Image hit series Who Is Jake Ellis?, her grounded and spotted black approach should be perfect for Mike Mignola’s uncompromising and enigmatic 1930s vigilante.

Architects of the B.P.R.D. world, writers Mike Mignola and John Arcudi once more mine the pulp ethos as they pit the Lobster and his crew against Russian wrestlers, demon midgets and the mob. Get ready for a wild ride — it won’t be long before the feared lobster claw will be burned on the inside of your retina.

The secrets contained within the Book of Keys hold the power to destroy the world, and when it is stolen, only Allison Carter can stop the thief from unleashing the world’s end. A private eye who specializes in such affairs, Al’s life is complicated by an unreal cast of characters including zombie cops, techno-wizards, closet trolls, ultimate darkness, and an undead boyfriend.

From the awesomely demented mind of J. Michael Straczynski, Apocalypse Al should be a kick-ass freak show that doesn’t take itself quite as seriously as Constantine or Hellboy. 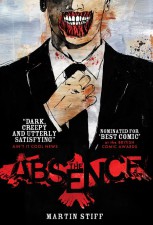 Writer/artist (and designer extraordinaire) Martin Stiff has somehow been one of the best kept secrets in British comics for years. If, like me, you managed to miss The Absence first time round, then you should be pleased to know that Titan Comics are reprinting the whole self-published (and British Comics Award-nominated) story in a very handsome 272-page hardback volume.

So what’s it all about? The Absence is a dark period mystery, depicted in evocative, scratchy black-and-white and set in an English village in the aftermath of World War II. The return of Marwood Clay, a man thought long dead by the villagers, threatens to unearth a lot dark secrets, and things get even murkier with the arrival of a newcomer – Dr Robert Temple – and the disappearance of a child on Christmas Day. This is a major bit of work that will now hopefully find the audience it deserves.

The ‘Killable’ storyline found Wolverine chasing after Sabretooth, who stole his sword, and leaving it to S.H.I.E.L.D. to track down the world-endangering micro-virus from the Multiverse that stole his healing factor.

Revenge is on his mind as he embarks on a journey to build himself up stronger in order to take on Sabretooth again, but it’s more difficult than he thought. Wolverine’s self-control has long distinguished him from Sabretooth, but will he be able to maintain it now?

If Quentin Tarantino and Robert Rodriguez had a comic book love child, this would be it. Coincidence or not, Alex de Campi gave her series the same name as these twisted gentlemen’s equally twisted 2007 silver screen romp, and it’s packed with the same high doses of gore, blood and pervy erotica as you’d expect.

After giving us bee vixens, a frightening killer queen and outer space martial arts fighting, this issue is billed as the most disturbing story yet. Doors open on Wednesday, enter at your own risk; moral insanity might ensue. 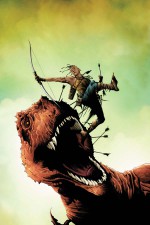 From writer Greg Pak and Dynamite Entertainment comes a brand new Turok. The Gold Key character, perhaps most famous in his incarnation as a Valiant headliner in the early 1990s, returns to comics this week as the star of his own title, spearheading Dynamite’s new relaunch of several Gold Key properties.

A young Native American warrior, exiled from his tribe in thirteenth-century North America, is on his own in the wild, pitted against nature in the ultimate struggle for survival. Complicating the situation somewhat is the fact that, in this case, nature includes man-eating dinosaurs. Alternate history meets classic adventure in one debut that should not be missed. 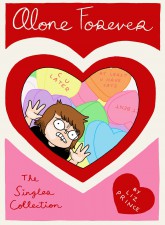 Liz Prince is a dab hand at hiding the iron fist of irony and sarcasm in the velvet glove of a gorgeous cartooning style, and after Will You Still Love Me If I Wet the Bed? (winner of the 2005 Eisner for Outstanding Debut and proclaimed by Top Shelf as “the world’s cutest relationship comic”), she’s now back in print with Alone Forever, a collection of her acerbic autobiographical webcomic.

Her unblinking look at single life includes cats, punky pop and no end of self-deprecation, and is probably the perfect anti-Valentine’s Day pressie. UK readers may also like to know that she’s going to have an exhibition of her pages at London’s splendid Orbital Comics, who are also producing an exclusive bookplate edition of the collection.

Marvel has been doing a good job in recent years of poaching indie talent and pairing them with the superhero characters that best match their sensibilities. Case in point is Nathan Edmondson with The Punisher. The writer best known for spy and special ops stories like Who Is Jake Ellis? and The Activity is a perfect match for a Punisher story.

In Frank Castle’s latest reboot, the vigilante is sent to Los Angeles, a compromise between the MAX era Punisher that got to operate entirely out of continuity and the more recent attempts to integrate Frank into the larger Marvel Universe. In this new volume, Frank takes on a military strike force in what’s sure to be an explosive opening salvo.

The pantheons of the ancients have fallen as acclaimed writer Jonathan Hickman wraps up his run on Avatar Press’ God is Dead, bringing ancient mythologies to bear on a very modern world. Through genetic manipulation, a group of humans have overthrown the gods of old, and have taken it upon themselves to rise up as the world’s new generation of divinities. But now they face the greatest opponent they could have imagined, and humanity itself is caught in the middle.

The world stands at the brink of a full-blown apocalypse, and the final battle between mortals and the divine is at hand. This first arc may be ending, but God is Dead is just getting started.

Al Ewing is given the monumental task of taking the reigns of Loki from Kieron Gillen. The series promises to combine elements of Gillen’s Loki with the other recent successful interpretation of the Prince of Lies, Tom Hiddleston.

In this book, Loki is finally using his deception and trickery for good, helping to protect Asgard from outside threats. Early previews indicate that all the humor and charm of the Loki character is better than ever. Ewing even teases that Loki will be able to switch on a whim from his male to female forms, guaranteeing even more fun. This book has real sleeper potential and is one of the All-New Marvel Now books that I’m most looking forward to.