Butterfly’s Rebecca Faulkner is a far cry from the hyper-sexualized femmes fatales of mainstream comics and film. Arash Amel, Marguerite Bennett, and Antonio Fuso create a wonderfully complex and grounded portrayal of the female spy that is both refreshing and rewarding for those tired of rubber science and black leather.

As most of us could probably guess, the adventures of comic-book spies like the Black Widow have very little basis in fact – and there’s nothing really wrong with that. Today’s comics are produced for a very specific, male-dominated audience, who – truth be told – dig hot chicks in skin-tight leather kicking ass.

While feminists and other activists might argue that any sort of empowerment represented in the character of Natasha Romanov is undercut by the overt sexuality built into this male power fantasy, at the end of the day her depiction in Marvel Comics is relatively harmless and, for the most part, positive. Her popularity among fans of all genders is undeniable.

There are alternatives out there, though. One such original take on the female spy can be found within the pages of Butterfly, a new series from BOOM! Studios/Archaia recently covered by Broken Frontier in an interview with creators Arash Amel (Grace of Monaco) and Marguerite Bennett (Batgirl). 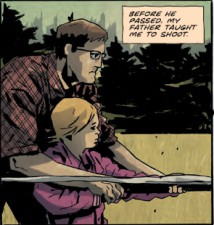 Completely grounded in real-world espionage, Butterfly chronicles the shadowy half-life of Rebecca Faulkner, a deep cover agent and former CIA operative who suddenly finds herself at the center of an unsanctioned assassination plot.

Set on her life path during childhood by her estranged father, Rebecca follows the trail of the mysterious Nightingale, hoping to navigate her way clear of the insidious machinations of her employers – a mysterious entity known only as the Project.

Butterfly’s success depends largely on adhering to its defining premise, which is to eschew common pitfalls in the portrayal of espionage and women in comics in favor of a more realistic, pragmatic approach.

Using tried and true storytelling conceits such as atmosphere and suspense to startling effect, Butterfly is a quiet book that builds tension by balancing exposition and visuals with exquisite precision.

Rebecca’s initial mission, a simple hand-off that goes horribly wrong, is brilliantly realized by both Bennett and artist Antonio Fuso (The Girl Who Played with Fire). The pacing here approaches the sublime, as tension and suspense are built by perfectly chosen 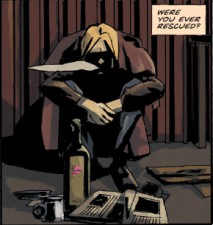 moments and sparse yet razor-sharp narration.

Fuso’s artwork is stylish and gritty, matching Bennett’s restrained, tightly plotted script panel for panel. His depiction of Rebecca is spot on: realistically proportioned yet still undeniably attractive and simmering with barely repressed danger. Fuso’s simple yet fluid page layouts and ability to express emotion using body language is as good as any artist in the biz today.

A welcome, refreshing addition to the genre of spy comics, Butterfly is an excellent diversion from the schlock and spectacle of mainstream femmes fatales. A book of high craft, delicious tension, and intriguing plot twists, Butterfly soars above the rest of the pack and makes it look easy.