When I was falling into comics back in the early 1980s, the pinnacle of ‘grown-up’ graphic narrative seemed to be Epic Illustrated – Marvel’s heavily formatted anthology of glossy material for Mature Readers.

In the murky oubliette of my recollection, one particular type of story seems to characterise Epic: a sort of fantasy quest in which a character – a naked, pulchritudinous young woman, let’s say – is driven to seek out the secret of the universe, only to stumble across something like a book made out of mirrors and find out that the answer lay inside all along.

Now it’s entirely possible that no story like that ever actually appeared in Epic Illustrated, but that’s the sort of feeling I was left with after reading Celeste, the debut solo book from British creator INJ Culbard, who has gained a fine critical reputation from his Lovecraft and Conan Doyle adaptations, as well as his collaborations on The New Deadwardians for Vertigo and, more recently, Brass Sun for 2000 AD.

Given the strength of those works, defined by Culbard’s languid, understated but expressive style, I was expecting great things from Celeste. Sadly, the book is like a puzzle whose pieces don’t quite fit together. 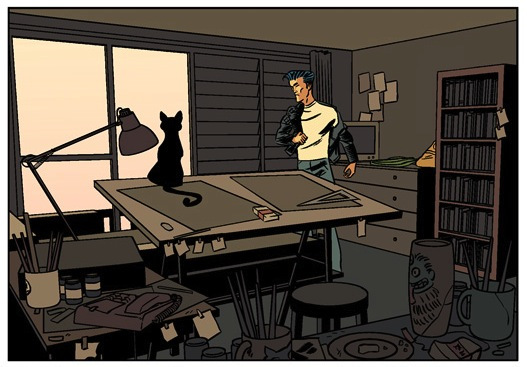 With a structure reminiscent of Mexican screenwriter Guillermo Arriaga (Amores Perros, Babel, 21 Grams), Celeste is a tapestry of three parallel but linked stories. In each of them, an individual is touched at a key moment in their life by a mysterious piece of cosmic ‘blossom’ that flings them into a hallucinatory reality where they’re totally alone – until they encounter another traveller who acts as an agent of change.

So far, so good, you might think. Every day, most of us must fantasise about being given the opportunity to step off the ever-accelerating treadmill and fix something that we feel is broken in our life.

However, for all the beauty of its storytelling, Celeste pulls up a little short in the necessary characterisation and psychological heft.

For example, the first of the three protagonists is a Japanese man – seemingly an artist – who leaves his home/studio one day to commit suicide in the country’s notorious Aokijahara Jukai forest – an ill-fated patch of woodland on the slopes of Mount Fuji where, for hundreds of years, people have made a macabre pilgrimage to end their own lives.

But while his yearning for self-destruction raises an automatic empathic response in the reader, we are given no clue as to the circumstances that drove him there – or even his name. 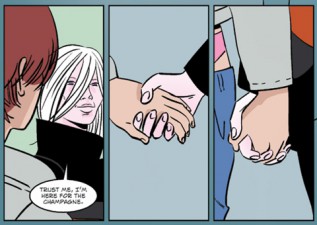 Meanwhile, in London, a young woman with albinism – Lilly – gets ready for her day and prepares to travel on the Northern Line into the city centre – an experience that prompts any number of existential crises on a daily basis.

In the third strand, a man – named as Ray Bone – wakes up in his car in the Californian desert. Seemingly a law-enforcement officer of some sort, he drives into Los Angeles, ready to bring a long and apparently perilous operation to its climax.

This is the stage at which the blossom intervenes and the book enters its “act two”. The suicidal artist finds himself in a world of creatures from Japanese folklore, while Lilly steps out into a 28 Days Later-style London, deserted apart from another young woman – Aaron, a precocious I-can-see-through-the-bullshit teenage irritant who could have wandered in off the set of Skins. 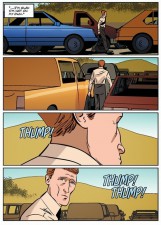 Over in LA, on the jammed but suddenly uninhabited 405, Ray Bone discovers an abducted man locked in the boot of another car. As Ray walks back to his home, accompanied by the amnesiac stranger, it’s gradually revealed that there may be a closer connection between the two men than either of them realises.

By the end, as the space blossom drifts away from earth to go about its business elsewhere in the cosmos and our three protagonists return to their ‘real’ lives, the message seems to be that we should accept ourselves. The Japanese lad has got in touch with his inner warrior, slayed a few demons and become ready to face life again; Lilly has been for a psychic drift to the moon, where no-one gives her a hard time about her albinism; and – in the most convoluted and unsatisfying of the threads – Ray Bone confronts and dismisses the image of the life he thinks he’d like to have. 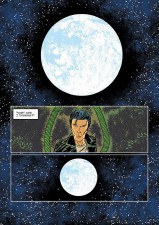 There’s nothing truly ‘bad’ about Celeste, but it’s very much one of those books that ‘gets away with it’ courtesy of being a graphic novel. Its rich visual imagery and (generally) smooth narrative flow, plus the apparent focus on psychological development rather than over-familiar generic action, might encourage some readers to ascribe a profundity to it that the substance of the work doesn’t support.

I’d stop sort of calling it pretentious, but the enigmatic and lyrical material falls short of the cosmic and psychological importance it aspires to. Despite some recurring imagery – particularly the moon – the three stories never really fit together that well, while remaining fairly slight on their own.

Even the title and the cover seem at odds with the other elements; ‘Celeste’ may be an allusion to the sky or the mystery of the Marie Celeste, but the astronaut wading through the blood-red sea on the cover – while an arresting image – bears no relation to anything that appears in the book.

Culbard’s book makes a handsome volume that sits nicely with SelfMadeHero’s other titles, but I’ve got such regard for the previous work of both artist and publisher that I was expecting great things from it. Based on those criteria, Celeste was a disappointment.