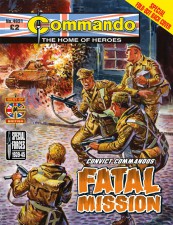 Luck had been with the Convict Commandos since they had escaped from the Japanese in 1942. They had carried out the most perilous of missions with little more than bumps and bruises to show for it.

But luck has a habit of changing suddenly, especially when it is pushed, and it certainly changed for the Convict Commandos as they flew to their next target. They had passed through dangerous skies before, but none quite as dangerous as those over Arnhem. 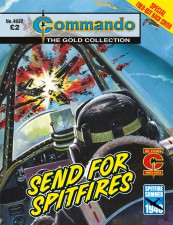 Commando No 4632 – Send For Spitfires

Time and again that staccato command unleashed the savage fighting spirit of Britain’s Spitfire pilots, driving them to hurl their machines in slashing attack after attack against the Luftwaffe hordes in the only method of defence that they believed in — attack.

This story is good value for money as there are two themes running through it. First you have a bit of double-dealing treachery and second you have the pilot unsure of his abilities. Both though are very nicely handled.

Medrano’s art is well up to fleshing out the narrative — neat, precise and with an accomplished use of perspective in the flying scenes.

But don’t rush to get going, back up and have another look at Ken Barr’s colour-packed cover; it’s worth a second glance. 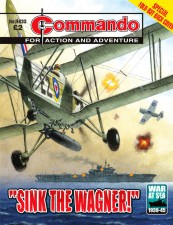 In 1942, over Canada, the last thing that the pilots of the Fleet Air Arm expected to see was a hostile aircraft. After all, the nearest enemy base was thousands of miles away. But that was exactly what the FAA boys did see — for the Germans had constructed a carrier in secret and sailed it across the Atlantic to attack a vital Canadian port.

Though outnumbered and outgunned, the Fleet Air Arm Martlet and Swordfish aircraft were not going to go out without a fight, and that hulking German aircraft carrier looked like a good target… 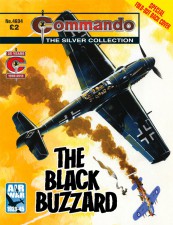 The wreck in the middle had a wounded pilot slumped over its controls, as near unconsciousness as makes no difference, and all that held his tattered plane in the air was the wingtips of his comrades’ planes on either side.

Mile by mile they struggled on, grimly, gallantly — then came the sinister chatter of cannons and machine guns behind them. The Black Buzzard had arrived for a kill…

This searing blast from the past bears all the hallmarks of a classic airborne Commando:

A great script from writer R.A. “Monty” Montague, which in turn, was expertly subbed by Commando staffers.

A dynamic cover from another aeronautical drawing legend, Ian Kennedy.

All of these elements combine to form a real winner — with aerial thrills and spills galore. In my opinion, The Black Buzzard is the closest to perfection (if that is actually possible) that a single Commando issue can be. This is one to be savoured.