Commando Editorial is sending out info on their titles to go on sale 4th July 2013. 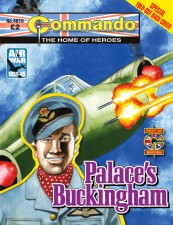 Flying Officer Jimmy Palace was a maverick. He liked nothing more than to take a few flying risks when at the controls of his beloved de Havilland Mosquito bomber.

However, he met his match in Air Vice-Marshal Bob “Gets It” Dunn — a formidable brass hat who detailed Jimmy to ferry him around in a dowdy Bristol Buckingham transport plane. This was one assignment Jimmy was determined to get out of!

And he had a plan in mind… 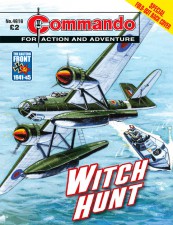 Lieutenant Yana Belinky of the famed, and feared, Nachthexen — the Night Witches — and Pilot Officer Drew Granger of the RAF had all but died when their Polikarpov had been shot to pieces around them over Russia. As they recuperated from their grievous wounds, some bright spark thought it would be a great propaganda stunt to send them to Britain for a morale-boosting tour.

As they boarded their transport to the UK, they were cheerful enough…they didn’t realise their problems were just about to start. 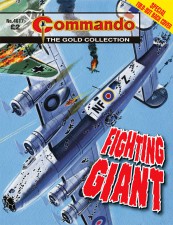 …A Coastal Command Liberator matches guns and guts with three massive Focke-Wulf Kuriers in the sky battle of the century!

The cover sort of says it all, doesn’t it? Ken Barr, the first of the Commando cover artists does a magnificent job of cramming two of the biggest warplanes of the Second World War on to one of our covers without it looking crowded. His battle-damage and flames hint at the action inside and anyone looking behind the battle would not be disappointed.

Peter Ford almost specialised in aircraft stories in the early days. And with good reason, he really brought them, and the men who flew them, to life.

After that, you’d think the story might be over-shadowed, but it’s not. There’s as much aggro amongst the British as there is between them and the enemy but it all gets sorted out in the end…or does it? 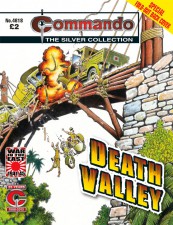 …that was the name the Burmese villagers gave to the precarious, sheer-sided gorge which had claimed so many lives.

And the arrogant Japanese who had invaded their land were soon to get a nasty surprise, courtesy of a British sabotage team, which would make them call it that too!

Death Valley certainly falls into that category. But what happens when one of those men — who is already pretty reckless — becomes increasingly arrogant and, even worse, more unscrupulous, as the mission goes on?

An interesting twist on a familiar theme makes this tough jungle tale one to savour — and is reminiscent of Commando’s gritty origins in the 1960s.