D.C.Thomson & Co., Ltd. has provided BF with information on their Commando titles, on sale 9th May 2013. 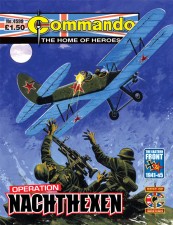 The German forces that invaded the Soviet Union had much to fear once the Russians’ fightback got into its stride. For the Russians are fearsome warriors when roused.
What the Germans feared more than anything was the night. For that was when the Nachthexen — the night witches — flew. Because, you see, when the Nachthexen flew, they carried death on their wings. 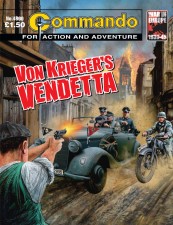 As the Germans rolled into Yugoslavia in 1941, with them came a particularly nasty Major by the name of Von Krieger. Arrogant and overbearing he singled out one particular Yugoslav teenager as a particular target for his venom. After an attempt on his life, he was determined to catch and kill Miro Ancic

Miro, for his own part, was happy enough with that. After all, he had several personal reasons for meting out justice to Von Krieger. 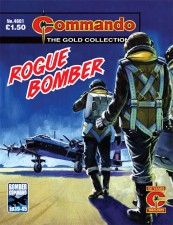 R For Roger was her name…but the air-crews called her R for Rogue.

There was something sinister about this four-engined giant, something uncanny that made brave men shiver with fear when they had to fly in her. For every pilot who sat at her controls came back dead!

Night after night she sat there waiting…waiting for her next victim!

It’s very hard to capture night scenes in black and white. With colour you can use deep blues to help define the scenes but with monochrome, objects and people are either there or they’re not. Our inside artist, Sostres, doesn’t have any problems with this though. His use of heavy blacks and broad, bold lines gives the impression of everything being seen in the darkness that bomber crews would have experienced in wartime skies.

Add that to a brooding cover and a tale of a hoodoo plane — always a Commando favourite — and you have a 1963 winner. 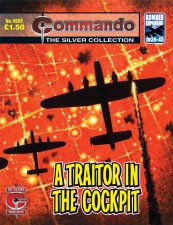 The roar of four mighty Merlin engines powering each Lancaster, the crump of flak bursting close to the planes, the rumble of bombs exploding far below — it was all in a night’s work for the bomber boys.
But for one Lanc crew, on one particular night, things were going to be different — because their pilot intended to land at an enemy airfield and hand his aircraft and its secret equipment over to the enemy.

It’s been said that espionage stories are not ideally suited to Commando’s text-and-pictures format and to some extent this is true. Cloak-and-dagger antics usually require a great deal of thought balloons for characters to explain the twisty-turny plot.
However, this book blows that theory out the (cockpit) window — because it’s a thrilling air espionage adventure tale that just never lets up, populated by plucky British spies, tough Resistance men and nasty Nazis. Fantastic stuff, we hope you agree.