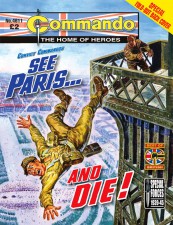 By Summer 1944, the Allies had broken out of the Normandy beach head and the race for Paris was on. The Convict Commandos were at the head of the advance — sent in to make sure the city wasn’t levelled.

For once, Jelly Jakes was pleased with their mission; he’d always wanted to see Paris. Mind you, he hadn’t banked on seeing it as he hurtled earthwards from the top of the Eiffel Tower! 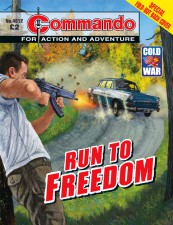 In 1968, a series of reforms known as The Prague Spring loosened the iron grip of communism on Czechoslovakia. Looking forward to this new beginning, Marek Kaldova — an RAF avionics expert — returned to his native Czechoslovakia after twenty years in exile.

Things didn’t go smoothly, though. The Russians invaded and Marek found himself on the run from the KGB who were desperate to uncover his priceless secrets.

Help was at hand, in the form of British Secret Service operative Sergeant Bob Carter, but even he would have his work cut out on the 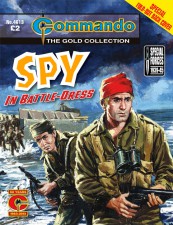 Commando No 4613 — Spy In Battledress

The Commandos were tough, dedicated men who had risen from the funeral pyre of Dunkirk to hit back at the Nazis with blazing tommy guns and a brand of courage that was unique. Their motto…United We Conquer!

But there was one man who mocked that brave motto when he crept ashore on raids with his Commando mates. They all knew him as “Mitch” Mitchell, but German High Command knew him better as Leutnant Hans Reister of the SS.

A traitor amongst Commandos? Not only would the man himself have to be bold, but the author of his tale would have to be similarly brave. Sustaining a story of treachery amongst a series of raids where the spy would have to avoid shooting his countrymen takes a lot of ingenuity. Fortunately for us, Eric Hebden succeeds admirably. And he manages to confound our expectations, too.

Alvaro, who did a score or more of the early Commando covers, sets the scene for the story and between his covers, Amador does a fine job of carrying the tale along with strong black and white work — even when he’s supposed to be drawing a red hat.

All in all a surprising yarn…for all the right reasons. 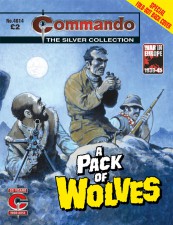 The three men were part of a band of Italian bandits, a pack of wolves who roamed through the mountains to make a fat profit while their war-torn country crumbled about them. There were other similar groups in the area too, but this lot had by far the strangest leader of all…an eccentric history lecturer from England!

Some people might think that they know exactly what to expect from the pages of Commando. But every now and then comes a story that plays with those expectations and ultimately turns them around.

A Pack Of Wolves is a case in point. Instead of a fearless Tommy we have an utterly despicable one. Expecting a villainous German? Well, here’s a noble and honourable one. And when we meet the characters who we think might be the eponymous Pack Of Wolves — we meet another pack of them soon after. Nothing is quite what it seems here. And this memorable tale is all the better for it.