News today of more forays into the vaults by D.C. Thomson’s Heritage Comics imprint. This month with a space opera flavour. News of Starblazer Presents and The Sci-Fi Files below… 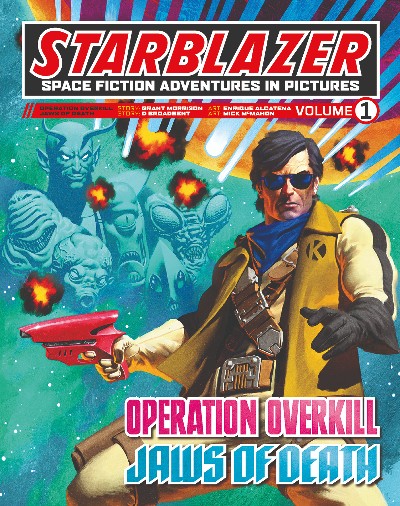 Heritage Comics and Starblazer Presents… Starblazer Special Edition. Released as a Graphic Novel in 2019, and in print for the first time since the 1990s, this special edition is available digitally on Kindle and comiXology from the 28th of December.

Originally published between 1979 and 1991 by DC Thomson, Starblazer was a pocketbook-sized, Science Fiction comic, presenting action and adventure stories set throughout space and time, overflowing with alien alliances, weird and wonderful worlds, and tantalising technology. This special edition presents issues #45 ‘Operation Overkill’ from 1981 and #71 ‘Jaws of Death’ from 1982, two classic adventures crafted by some comic book legends-in-waiting, in an easy-to-read format, perfect for all digital reading devices.

‘Operation Overkill’ provides a glimpse into some of British comic legend Grant Morrison’s earliest work, while Argentinian illustrator Enrique Alcatena’s artwork brings such imaginations to life in exquisite detail. Likewise, ‘Jaws of Death’ by D Broadbent showcases Mick McMahon’s instantly recognisable, clean, confident draughtsmanship. Together, they present some of the best of British Science Fiction, appealing to a contemporary audience as well as fans of the original pocket-size publication. 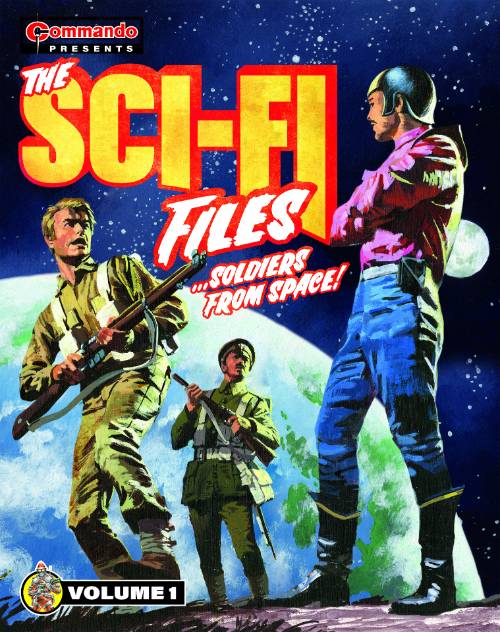 5…4…3…2…1… LIFT OFF and out into the realms of Science Fiction as Commando Presents…The Sci-fi Files Volume 1: Soldiers from Space! Available digitally on Kindle and ComiXology from the 28th of December.

This otherworldly anthology collates together four Science Fiction comics from a galaxy’s worth of adventure in action-packed black-and-white art. From time travelling troopers to gigantic monster bugs, this out-of-this-world selection of comics is sure to send your imagination into space!

A spaceman came travelling to World War Two in a classic tale from 1971 – #577 ‘Soldier from Space’! Move over Ming the Merciless, as a man from 3000 AD travels through space and time to enlist troops to fight in a cataclysmic future war!

Let’s do the time warp again in the second 1970s issue, #1294 ‘Time-Warp Warrior’! Another man from another world, a future world, Cam travels to the past to stop an adversary hell-bent on the total destruction of the planet!

We travel through time to more modern Commandos with #5331 ‘Flight from Tomorrow’! Amid the turmoil of the Dunkirk evacuations, Arthur C Clarke award-winning writer Adrian Tchaikovsky’s script sees a group of refugees being aided by the British soldiers on the retreat — only these refugees aren’t trying to escape to a different place — but a different time!

Finally, giant creepy-crawlies are on the prowl in #5477 ‘Bug Attack’! When a fracking operation in rural Colorado unleashes a hoard of mammoth, killer insects, the US military is ready to nuke the suckers… but it’s a race against time to save the scientists stuck in the hive!

Also included in the digital edition is a cover gallery, featuring the original artwork for each issue.