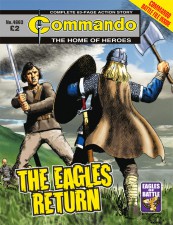 It’s true that after 1066, no foreign power has successfully invaded Britain. Before that, though, things were different, as waves of foreign invaders rolled in over the seas.
The Romans were amongst the first to arrive, but when their Legions began to withdraw other warlike clans were quick to fill the power vacuum they left. Clans like the Saxons warriors who surged westwards in search of fresh conquests. It seemed the Eagles who did battle with the Romans would have to unsheathe their weapons afresh. 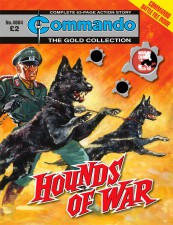 Gruttenstein castle — a name that sent shivers down men’s spines. Every field and valley around it was sown with mines and booby-traps. Guarding the castle were the most cold-blooded killer-troops that Germany could produce. Hidden inside it was the terrible “vengeance weapon” soon to be unleashed on its helpless victims…
…And up there in the secret control room, waiting, gloating, was the fiend who called himself “The Wolf of Gruttenstein”.

There have been a fair few Commando stories over the years with animals as vital parts of the plot; almost characters if you like. This was probably the first but it feels strangely contemporary as the dog’s nose is being used to sniff out explosives as they do today. As usual, the inventive Major Hebden weaves a lovely tale and draws a complex villain with a dual personality. No cardboard cut-outs here.
Ken Barr’s slavering hounds set the scene and Boluda follows his lead with his strong black-and-whites. No ruff-ness there!
That’s enough of my barking, get reading! 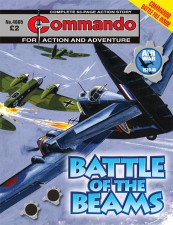 During World War II, the battle for supremacy between the scientists of Britain and Germany was as furious as any at sea, on the ground or in the air.
When German advances in aircraft guidance gave their bombing raids brutal accuracy, young RAF Pilot Officer Clem Peterson and government scientist, “Doc” Smith, were just two of the men facing the task of neutralising the new system before enemy warplanes could bomb Britain to its knees. With their hands full, the last thing they needed was an inflexible Air Marshal unwilling to accept the need for progress…but that’s what they got. 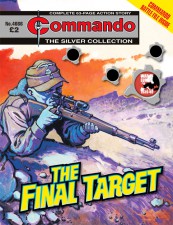 A Nazi through and through, Hans Kruger was one of an elite squad of raiders led by his brother, Fritz. Infiltration and sabotage were their specialties, and they were prepared to fight to the last bullet, to die rather than fail to succeed.
They had to be stopped — somehow!

This tough tale —with an unrelenting, murderously ruthless Nazi unit at its core— seems almost like a throwback to Commando’s gritty origins in the early 1960s. Thankfully, though, it’s not all darkness — as we discover that there can be some honour and goodness on the battlefield and, on occasion, it can come from an unexpected source…
So, kudos must go to the freelance contributors above, as well as the 1988 Commando editorial team, for creating this memorable book.