Attention angst fans, stay away from Daredevil #30! This issue is all about the joy, and you really should give it to the non-comics readers in your life.

Think of it this way, if you were introducing Doctor Who to someone who has never seen the show, you’d go straight to season three and show them “Blink.” This is the Daredevil issue you should use to show new readers how much fun comics are as a storytelling medium.

In a one-shot that follows the best tradition of guest appearances, Mark Waid and Chris Samnee achieve an homage to the spinner-rack comics you wish you grew up on (or you did grow up on, lucky you) by pairing up Daredevil and the Silver Surfer in the search for a dangerous foe who eludes vision.

Writer Mark Waid neatly solves the cliffhanger from last issue by bringing in Kirsten McDuffie to handle the workload while Foggy is in the hospital. Refreshingly, the river doesn’t run deep with this issue (much), and we are treated to characters in constant motion who do not have time to wallow in deep meanings or to ponder their fates. Ru’Ach the alien is standing in Matt’s office asking for help, and that’s the priority of the moment.

Of course, the alien isn’t what he seems, and when the Silver Surfer crashes through the wall (if you had the Power Cosmic you wouldn’t bother with doors or knocking, either), Matt assumes the Surfer is the bad guy.

“I don’t care where you come from, you do not endanger my staff!”

“Forgive me. I was victim of Ru’Ach’s abilities, as you may well be!” 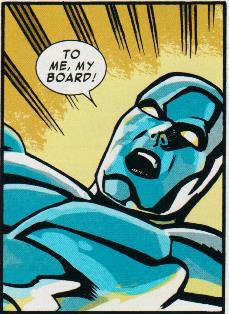 Waid must have had fun with this issue. It’s a classic format where the bad guy deceives the good guy. Enter the second good guy who makes things worse and fights the first good guy before the realization hits that they are really on the same team. Then our heroes team up to bring down the bad guy. And angst fans, we do get a small dose of soul searching at the end to remind us that this is still a Daredevil comic, after all.

Chris Samnee’s smart art contains the beautiful bold lines reminiscent of an earlier period, but he really saturates the panels with deep blacks to great effect here. And nothing in the issue is cooler than the two-page spread with Daredevil “driving” the Surfer’s board. Matt Murdock joyfully surfing through New York is worth picking up the issue. Bravo!

You won’t have more fun reading anything else this week.