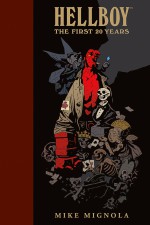 March 2014 marks the twentieth anniversary of Mike Mignola’s career-defining release of Hellboy: Seed of Destruction #1. After the character’s somewhat humble beginnings as an eight-page feature in Dark Horse’s San Diego Comic Con Comics special, Seed of Destruction would begin the long life of the beloved “beast of the apocalypse.”

To celebrate, Dark Horse is proclaiming March 22, 2014 as “Hellboy Day,” with events happening in comic shops around the country! Dark Horse is inviting our retail partners to celebrate with us, by offering up exclusive promotional materials, as well as ordering discounts on all Hellboy and BPRD backlist titles.

Additionally, Dark Horse will produce an all-new sampler comic featuring two classic Mignola tales: “The Ghoul” and “Another Day at The Office,” as well as two new stories by Mignola, Fabio Moon, and R. Sikoryak!

Dark Horse is also pleased to announce that Meltdown Comics and Collectibles in West Hollywood, CA will be hosting Mike Mignola on March 22! Look for more details to come on the event.

Fans: make sure to tell your retailer you want your local store to participate in this awesome celebration today! Retailers: look for the March dated issue of PREVIEWS for details on participation levels, as well as promotional support being offered by Dark Horse for the event!

Additionally, look for the 20 Years of Hellboy hardcover collection, on sale in comic shops everywhere on March 19! This deluxe oversized hardcover presents Mignola’s favorite covers and illustrations in gallery style, from his first drawing of the character through twenty years of publishing.