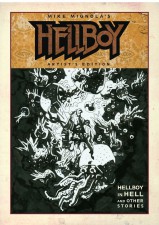 ”Since the beginning, I’ve been pretty much in awe of the Artist’s Edition series IDW has been doing,” said Mignola, “I’m thrilled (and actually a little honored) to have a Hellboy book appear in that series.”

Collecting the first five issues of Hellboy in Hell, where, after making the ultimate sacrifice, Hellboy must confront what Hell has in store for him. Alone, he faces the demons of his past as Mignola reveals the dark secrets that could define Hellboy’s legacy. Additionally, several shorter works will be included in this volume.

“I can’t thank Mike enough for allowing us to do this book,” said Artist’s Editions editor Scott Dunbier, “His stories are classics and it’s a joy to be able to pour over his art.”

Mignola’s enduring creation has established a devoted following through the Hellboy series and the related tie-ins B.P.R.D., Abe Sapien, and Lobster Johnson, all published by Dark Horse Comics. Hellboy has been adapted into two successful major motion pictures by director Guillermo Del Toro and three animated features. Mike Mignola and Hellboy are staples of modern comics and IDW is ready to shake the Right Hand of Doom!

What is an Artist’s Edition?

AN ARTIST’S EDITION PRESENTS COMPLETE STORIES WITH EACH PAGE SCANNED FROM THE ACTUAL ORIGINAL ART.

While appearing to be in black & white, each page has been scanned in COLOR to mimic as closely as possible the experience of viewing the actual original art—for example, you are able to clearly see paste-overs, blue pencils in the art, editorial notes, art corrections. Each page is printed the same size as drawn, and the paper selected is as close as possible to the original art board.