Death Sentence’s edgy take on an original premise stays strong with its second issue, as its characters struggle to come to grips with their surreal situation.

Verity Fette is an introverted freelance artist and graphic designer. Danny “Weasel” Waissell is an eccentric rock star with a penchant for debauchery. David “Monty” Montgomery is an antisocial comedian with a public persona that is equal parts wisecracking Jim Carrey and mores-flouting Jim Morrison. Common to these three characters is perhaps one of the most unique diseases ever seen, a new sexually transmitted disease, known as G-Plus, with a decidedly unexpected side effect — super powers.

Unfortunately, in addition to superhuman abilities, G-Plus also brings along with it the (somewhat more unpleasant) effect of a reduction in life span, with the luckiest patients surviving just six months from contracting the illness. It’s one of the more interesting diagnoses you can receive, and the book’s three main characters take to dealing with it in different ways, all the while dodging heavily armed military personnel looking to apprehend or kill those infected. 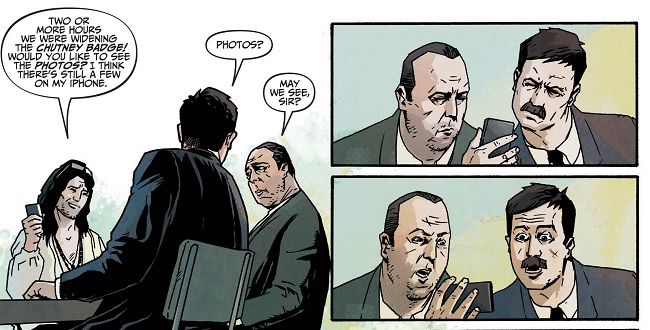 Writer and cover artist Monty Nero builds a backdrop for this book that is both as otherworldly as you would expect, given the premise, and as realistic and grounded as you could hope. While there are some easily noticed cases of cliché stock character types (particularly in the depictions of Weasel and Monty), Death Sentence as a whole is permeated by a gritty sense of verisimilitude in both the characters and (especially) the dialogue. When, from time to time, the out-there concept of an STD bestowing superpowers threatens to wrench the book into absurdity, the otherwise believable nature of Nero’s writing gives the reader a steady foothold in something not entirely unlike the real world.

This realism is notable too in the work of artist Mike Dowling. His figures, though occasionally minimalist in rendering, are drawn in lifelike proportions with a good amount of attention to conveying emotion and movement. Dowling’s sequentials give the action scenes a fast-paced feel, and the characters each a unique personality that complements Nero’s dialogue. One-third of the way through a six-issue run, Death Sentence is coming together better than anyone had a right to expect, and there’s no signs the creative team will be slacking off any time soon.