Francis Manapul and Brian Buccellato are the new high priests in the temple of Detective Comics. #30 is their sermon; a renewal of the comic-book faithful’s belief in the Dark Knight and his mythos.

For 75 years now, readers have followed Batman. During that time our faith has been tested by multiple villains and numerous storylines. However, the dogma of the character remains much the same: there shalt be darkness, there shalt be revenge and there must be always be regret. We all know this story, so the question has to be asked: Why bother to keep reading? Isn’t it all just variations on a theme?

The simple answer to this is yes; the bible of Batman is an established set of rules, or ‘canon’. Nevertheless, in the hands of the correct creative team, Bruce’s tired story comes to life again.

A good writer/artist has the ability to interpret Batman’s core tenets with a comic-book sermon to stir the souls of readers, who then end their Wednesday Sabbath with renewed faith in the Dark Knight. Detective Comics #30 is one such glorious sermon, delivered by two creators seemingly steeped in Batman and all he represents. 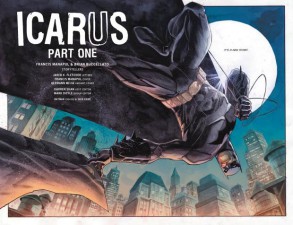 Detective Comics should never have been in doubt; Manapul and Buccellato have preached expertly from the pulpit of The Flash.

Nevertheless, this first issue feels different from that book. Their enjoyment, the sheer ‘we are here, creating Batman’ exuberance leaps off the page. They absolutely set out what makes Batman Batman.

I am not referring to the obvious signs – deaths in alleyways and bats through windows. No, here they present the stuff that makes the hairs on a Batfan’s arms stand on end: Batman almost lost in a twinkling Gotham skyline because he seems so completely part of it; the whites of his eyes in focus; the precision throw of a batarang at a target he isn’t even facing. All this is presented in a stunning nine-page opening, so expertly communicated that the dialogue seems unnecessary. Epic.

This comic centres on philanthropic Bruce Wayne meeting a like-minded individual, Elena Aguila. This focus is another central tenet of the Batman faith – namely that he exists to provide two solutions to Gotham’s ills; hope for the needy as Bruce and fists for the greedy as Batman.

We are also introduced to another strong female – Annie Agulia, Elena’s daughter and four-time x-treme motorbike stunt champion. This is intriguing; Annie’s mastery of her vehicle is outstanding, and her shock of auburn hair reminds me somewhat of another master of the physical – Carrie from The Dark Knight Returns.

In addition, ‘Aguila’ in Spanish translates as ‘eagle’, and given the title of the tale – ‘Icarus’ – linkages start to form in a follower’s mind. Manapul and Buccellato thus provide much to think about.

The antagonists in this issue are corrupt politicians and criminal gangs – the sort of villain that the Dark Knight began with in the 1939 Detective Comics. There is always something pleasing about seeing Batman pitted against the original ‘cowardly and superstitious lot’. Perhaps this is because fighting the kind of criminal we know exists in society makes Batman seem possible (Long Halloween, anyone?).

This issue feels true, accurate, real. And the allusions to Bruce’s pain at losing his son Damian, plus references to an event portrayed in Scott Snyder and Greg Capullo’s ‘Zero Year’, truly cement this story into the Batman oeuvre.

It is a beautiful comic to behold. I don’t think there is a person alive who could persuade Francis Manapul that Batman cannot fly. In this issue, he soars across skies and tracks his prey from above, like a black hawk hunting rodents.

Manapul’s Dark Knight is the darkest thing in a city filled with colour. Gotham glows: skyscrapers, churches, Chinese lanterns. The pages are awash with light, and where shadows form they do so with purpose – to emphasise facial features and the angles of buildings, not from some clumsy emphasis on darkness ‘because Batman’. The pages seem to be made out of stained glass. Truly, this issue is a temple to His Dark Majesty.

And that cover? The acid yellow spotlight framing a dark-blue Batman, inside whose dark wings is framed a story? Surely this is DC’s cover of the year so far? Magnificent.

This comic is the best follow-up to Batman’s 75th birthday on March 30th. We shall return to the temple next month to continue for the next 75 years.