The Beacon is a superheroine with some anger issues. While she means well, a lot of those who happen to be nearby when she is chasing down thugs or otherwise thwarting evil often wind up seriously injured, or worse. Naturally, this doesn’t endear her to either the news media or the public at large. Thus The Beacon became Furious, a hero with what mildly be called an image problem. At first glance, that premise probably sounds a great deal like Mark Millar’s Kick-Ass, but the books part ways there.

Unbeknownst to the public, The Beacon’s alter ego is Cadence Lark, a celebrity in her own right, though decidedly of the grist-for-the-tabloid-mill persuasion. As a child, Lark was suspected of playing a role in the death of her own father, and the question of just what did happen all those years ago lies unspoken beneath much of what happens in this first issue. That fact alone speaks to a rare emotional and psychological depth that permeates nearly every scene. Other books may aspire to claim such attributes, but Furious has it in spades. 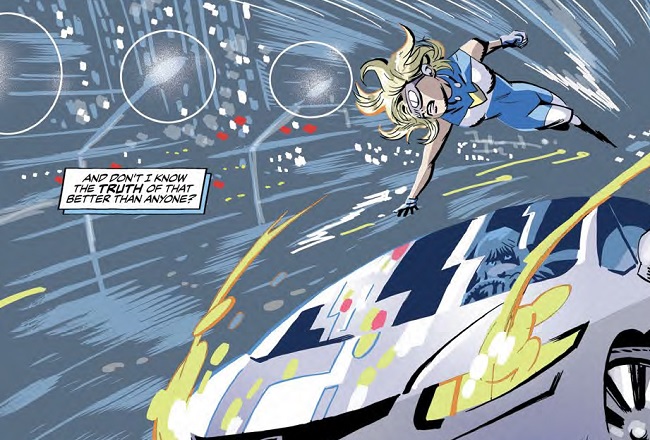 Victor Santos’ art, which at first glance appears a bit static and formulaic, turns out to be quite dynamic as the story progresses. Santos’ composition is very action-oriented, but handles slower scenes just as well, and his often creative layout choices lend to the book’s overall pacing in a way that most artists struggle to do. Also notable is the fact that he manages to avoid a certain… erm, unrealistic portrayal of the human body that is far too often part-and-parcel of comics with female leads. Santos’ sensible attention to human anatomy is another aspect of what makes Furious unique.

What Glass has crafted here is unmistakably a superhero story, but apart from that, it looks like the start of a remarkably human story. While we’ve only started to peer behind the veneer of the hero Furious (*ahem*–The Beacon!) to get at the character of Cadence Lark, what little we see goes beyond the typically flat and innocuous portrayal of a hero’s alter ego. If this title can maintain the quality of this first issue, Furious should turn out to be the sort of book that can be enjoyed equally by fans of the Big Two and by those who actively avoid anything that carries with it the faintest scent of a superhero. In either case, and at all points in between, you really, really, should give Furious a chance.