Artist Rick Burchett (left) and writer Greg Rucka (right) were introduced to each other by legendary writer and editor Denny O’Neil, and have worked together on a number of titles over the years including Batman, Detective Comics and Queen & Country. But when they couldn’t get a publisher to allow them to collaborate on a major project, they set out on their own to launch a creator-owned series online.

The result was Lady Sabre & The Pirates of the Ineffable Aether, a swashbuckling pulp adventure series starring Lady Seneca Sabre.

After posting the story online free for a couple of years, Greg and Rick decided to take the next step and launch a Kickstarter to fund the print version of the book. They estimated that they’d need $26,000 to cover expenses, but hit 521% of their goal, ending the campaign having raised $143, 379.

I spoke with Greg and Rick at their launch party for Lady Sabre Volume 1 at Bridge City Comics in Portland, OR. They discussed how they came to work on the title, the challenges of having a wildly successful Kickstarter campaign, and their future plans for the comic.

What was your motivation for creating Lady Sabre and why did you do it as a webcomic?

Greg Rucka: We did Lady Sabre as a webcomic because we couldn’t get anybody to pay us to work together, that’s why! We had tried to do multiple things over the years with different publishers on various scales of ambition, and we couldn’t get a publisher to let us do a thing together for love nor money.

Rick Burchett: Greg was going to do a webcomic with another artist who was taking an exclusive with one of the big publishers and he said,  “I don’t know what I’m going to do now.” And I said,  “Why don’t we do it?” 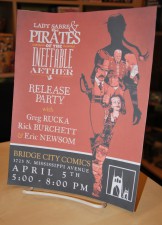 On the Lady Sabre website I noticed that you include Greg’s scripts with each page, and that the layouts described often vary slightly from the layout of the finished art. Is this something that’s common in your collaboration?

Rick: It’s a very bold move on my part. We are kind of on the same link, and he trusts me enough to know that if I make changes it’s just to clarify the storytelling visually.

He’s the best comics writer I’ve ever worked with. He understands the medium better than anybody, so it’s not real hard for me. And in those instances where I think something will work a little better, I will do it. And I told him, like I’ve told every writer I’ve ever worked with, “I never, ever change your story”. Never. What I may do is change a certain way of looking at a sequence so it accomplishes the same thing maybe a little better visually.

Rick and I are on the same wavelength. If you talk about technical ability, artistic ability, storytelling ability, there’s nobody better in the industry. I know that Rick is going to understand what it is I’m after. And if I said “This is four panels” and Rick comes back and gives it to me in three, that means his storytelling sense had a better way to do it. I’m very fortunate to work with someone like that.

It’s hard to explain, but I think that above everything else there’s a level of trust. I know what he can do, he knows what I can do and there’s never any question. We’re both aimed in the same direction to get the same effect.

Rick: I’ve worked with some writers when it’s been real difficult to do what they want you to do on a page because they’re not thinking visually.

Greg: They don’t understand how the page works.

There’s a whole language of comics that has nothing to do with film. It has to do with the page and the rhythm of storytelling. And that takes an understanding of the medium that most writers don’t have. 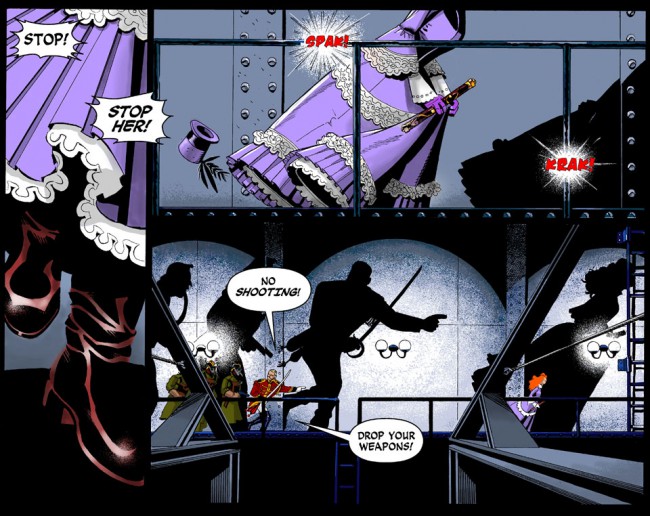 The first appearance of the intrepid Lady Sabre

Your Kickstarter campaign was incredibly successful, raising over 500% of its original goal. While that is certainly good news, what challenges and concerns did it raise?

Greg: With the Kickstarter campaign, there’s this misconception that, “Oh, you got all this extra money so you get to spend it”, and it’s like, no, because we got that extra money by people pledging and there were rewards. And the more people who pledged, the higher those rewards went.

So it was incredibly successful, and I am not sorry about that in any way, shape or form, but I will say that it increased some of the things we were dealing with logistically and creatively. And at the business end, it increased it exponentially. Things got a lot more complicated for us. I had to get thirteen pallets of books. Thirteen pallets! Ten thousand copies of a book that are now in a warehouse here in Portland. I mean, that’s crazy.

That means that I had to rent a storage facility. That means we had to do a bulk order for all the mailing stuff. So the price and everything went up. When everything’s done and we do the final accounting, I’m hopeful we’ll still be in the black on it. That would be great, because then we can divide the check in three parts and send it out. But, yeah, the more successful it is, I do think the more pressure there is on you to make sure that you can deliver.

Rick: When you have an audience that’s spread all over the world, shipping these books costs a lot. So while we made well over our goal, it’s all gone into books and the creation of all the extra things we’ve done to go along with the book, and then the postage for all the books and extras. So all the money is accounted for and it didn’t go into our pockets. What we have left over, we’ll put towards the second volume.

Do you think that creating a physical copy of the book helped to expand the audience you had when Lady Sabre was only digital?

Rick: Yeah, I think so. A lot of people still just like the act of holding a book and reading, and a lot of people aren’t comfortable reading things online for whatever reason.

We did Emerald City (Comic Con), and there were a lot of people who hadn’t heard about it at all. They saw the book at the table and wanted to know if they could buy a copy, so it was kind of our coming-out party.

People now know we’re out here and we’re hoping, and kind of expecting, that the number of people who order Volume Two will be higher, because now they’ve been exposed to it. They’ve experienced it and read it and like it and want to find out what happens. Hopefully!

Greg: That was one of the amazing things to me. We were giving to this people online for free and we had people writing in all the time asking when’s it going to be a book? And it was was like, ok, you want to buy a book but we’re giving it to you free?

It was a very unusual thing that they wanted to actually buy a physical product, which is great! I’m glad. That was the plan all along, and it’s nice to know that people actually wanted it. 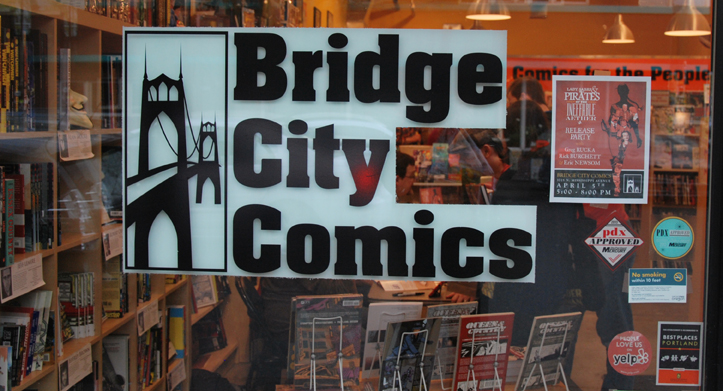 What can you tell us about the future of Lady Sabre and if you think you’ll do another Kickstarter?

Greg: We are considering our second Kickstarter for Volume Two. I suspect that it will happen now. We’re not going to do that until after we get this one taken care of and squared away. We are rapidly approaching the end of this first volume of Sabre. The second volume is going to be Book One, Part Two, so we are coming up on the end of the first book of Sabre. That should be hopefully finished online by June. And then we’ll be moving into Book Two, which is the one that a lot of the Kickstarter backers, some of the premier backers, will appear in as characters. So that will be interesting.

Rick: We’re going to have to do another Kickstarter for Volume Two, just for the postage!

Thanks to Greg and Rick for their time. The ongoing adventures of Lady Sabre and the Pirates of the Ineffable – and further information about the series and its creators – are available at IneffableAether.com.